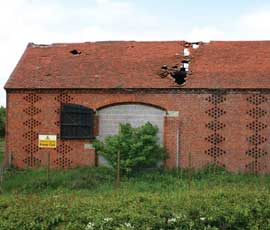 An agricultural contractor has been fined after an employee plunged through the fragile roof of a farm building and broke his back.

David Clark was working in a team replacing a barn roof at a farm in Winfrith, Dorset, when he fell 4m (13ft), fracturing three vertebrae and a rib.

His employer Michael Fry, of New Grove Barn, Martinstown, Dorchester pleaded guilty to breaching the Work at Height Regulations act. He was fined £2,000 and ordered to pay costs of £9,440.

Weymouth Magristrates’ Court heard that Mr Clark was on a crawling board when the roof of a lean-to building next to the barn collapsed beneath him and sent him crashing to the ground.

As a result of his injuries, Mr Clark was off unable to work for two months. He has since retrained in another career.

The Health and Safety Executive (HSE) who investigated the incident in December 2011 said there were significant “fall from height risks” at the site.

Speaking after the hearing, HSE inspector James Powell said: “The dangers of working at height are well known, yet poor safety standards and lack of safeguards still exist among some contractors.

“In this case, the work had not been properly planned. Mr Clark and fellow employees were working on a fragile roof and yet Michael Fry had neglected to implement basic safety measures to protect them and minimise the risks of falls.”

Dangers of working at height under spotlight