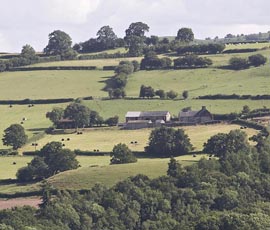 Campaigners are claiming that over half of England will be at an increased risk of development if the government’s proposals to reform the planning system go ahead.

The Campaign to Protect Rural England has mapped England and discovered that currently 55% is undesignated.

The rest has a nationally recognised designation, such as National Parks and Areas of Outstanding Natural Beauty (AONBs), as well as Green Belt status.

CPRE said it was concerned that the draft national Planning Policy framework failed to recognise the intrinsic value of the wider countryside so it could be at risk or urban sprawl and development.

Fiona Howie, head of planning at CPRE, said: “We are pleased that the Government’s planning reforms will retain protections for specially designated countryside.
“But ministers have provided no reassurance that the final NPPF will recognise the value of the wider, undesignated countryside that makes up more than half of England’s rural landscape.

“We are not seeking a national policy that would prevent all development. But if we are to avoid damaging the character of rural areas by making it easier for inappropriate, speculative building to take place – a bungalow here, a distribution shed there – decision makers must be encouraged to take account of the intrinsic value of the wider countryside when considering development proposals.”

The CPRE claims that most risk is countryside in the East Midlands with 73% of its area undesignated, followed by the East of England with 66% undesignated.
Other areas without designation include the large majority of Cornwall, North and East Devon; the Pennine slopes east of Macclesfield; North-west Dorset and South Somerset and most of Romney Marsh.

The map below shows the percentage of land in each English county that has no official designation status: