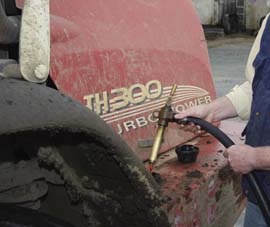 The European Commission has handed a lifeline to farmers by allowing tax exemptions on fuel to remain, provided the agricultural industry meets targets on carbon emissions.

It proposes an energy consumption tax based on the amount of energy used per gigajoule, as well as a carbon-related tax of €20/t of CO2 emitted.

The proposals also set out an agreement to allow red diesel to remain, provided the industry makes efforts to help cut energy use and carbon emissions. This might include using technology to meet a target to reduce energy use or carbon emissions by a certain date.

It would be up to member states to define the targets, though Brussels would step in to ensure a certain level was met.

However, an EU-wide study must also provide “conclusive evidence” that agriculture is at risk of so-called “carbon leakage”, which means agricultural production would need to shift outside of the EU to remain competitive.

On that basis, the commission would then suggest “relevant fuel tax reductions” by introducing a derogation.

Officials said once the full version of the report was published at the end of 2012, the commission would take action to ensure all industries susceptible to carbon leakage were treated the same way.

In a bid to encourage the use of renewable energy, the carbon-related part of taxation would be zero for all biofuels that meet sustainability criteria, the officials added.

The draft proposals provide a lifeline to the industry, after a leaked version of the document had suggested tax exemptions on fuel would be removed entirely, forcing energy bills to skyrocket.

Despite the relaxation, UK officials have already joined their German counterparts to express concerns over the proposals.

Algirdas Šemeta, commissioner for taxation and customs, said taxation policy requires unanimous agreement across member states and it was his duty to convince countries the proposals were good enough.

“A fair and transparent energy taxation is needed to reach our energy and climate targets,” he added.

“We need a more resource-efficient, greener and more competitive EU economy, and [this framework is] an opportunity to shift the tax burden from labour to consumption, in order to favour growth-enhancing taxation.”

The revised directive is expected to come into force on 1 January 2013.

What do you think of the proposals? Have your say on the FWi forums