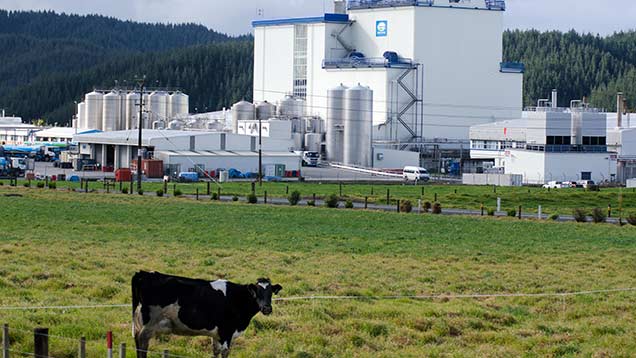 New Zealand co-op Fonterra has offered its 11,000 farmers up to £180m of loans to help them through the dairy depression.

The giant exporter has slashed its milk price forecast from NS$5.25/kg of milk solids to NZ$3.85 – roughly 12p/litre.

Even low-cost New Zealand dairymen would be losing money or breaking even at those prices, even when the 1p/litre dividend is included.

But the co-op has taken action to help milk producers through the crash in world dairy markets.

Fonterra farmers will be able to apply for support loans, interest-free for two years.

They will only be paid back when the farmgate milk price rises recovers to more than NZ$6/kg of milk solids (19p/litre).

The loans will be funded through one-off savings, such as improving working capital and recently cutting more than 500 jobs.

Fonterra’s announcement is set against another heavy slide on the Global Dairy Trade commodity auction this week.

The key market indicator fell 9.3%, with the 10th successive drop leading to the worst result since records started in 2008.

“In New Zealand we have the advantage of a largely pasture-based system which will allow farmers to lower costs,” he said.

“Nevertheless, it will be a very difficult season for farmers if current prices continue.”

New Zealand milk prices are fully exposed to world markets, as the country ships more than 90% of its dairy products abroad.

British farmers’ returns have been more protected, but have come under extra pressure from the strong pound against the euro, a supermarket price war and business weakness in some processors.

Arla, the biggest UK co-op, is paying farmers 23.01p/litre in August, while First Milk is paying producers 18.1-19.67p/litre for most of their production.