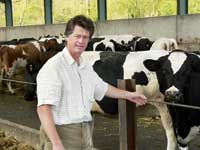 Looking back 15 years, NFU dairy board chairman Gwyn Jones admits that setting up Milk Marque as the replacement to the MMB in England and Wales was a mistake.

“At the time I was a supporter of Milk Marque and stuck with it to the end,” he says. “I subscribed to the belief that if we stuck together as farmers we would have more clout in the marketplace. There was optimism in the air, a belief that we would finally get the price we deserved for our milk.”

But then things started to go wrong, he recalls. “For a start, Milk Marque over-egged the pudding, putting processors under such pressure they had no choice but to fight back. They made a concerted effort to tempt farmers away from Milk Marque, which was not difficult.

“And later, as things got tougher, Milk Marque started to breach the rules with regards the selling of milk.”

Mr Jones says, at the time, he was against the formation of the three successor co-ops. “This was done by simply dividing the country into three zones, which smacked of the old imperialism – not a particular recipe for success. I would have preferred the retention of Milk Marque, working under an industry regulator, to give the industry time to devise a better plan.”

Having said that, Mr Jones says the development of the co-ops has been remarkable, given that they started from scratch, with the same pool of farmers, in two cases the same management and, initially, no way of adding value to their milk.

Even when opportunities came to buy processing capacity, it had to be funded by farmers and was often the assets that other milk buyers did not want. “The fact we have only had one major casualty (Dairy Farmers of Britain) in nine years is quite phenomenal,” he suggests.

Mr Jones believes relations between dairy farmers and milk buyers are now the best they have ever been. “Under the MMB the farmer’s attitude was that, once the milk was in the tanker it was someone else’s problem. Now we are far more market focussed.

“Buyers too are more open, while retailers have made a giant leap with the development of dedicated supply chains for their liquid requirements.

“We’ve still got a difficult period to get through before we reach the promised land, where global demand picks up again and prices start to climb. But so long as we can strengthen the farmers’ negotiating position when selling to processors, and curb the worst excesses of retailers, the industry has a lot to look forward to.”

* To test your knowledge of the MMB in our special quiz: