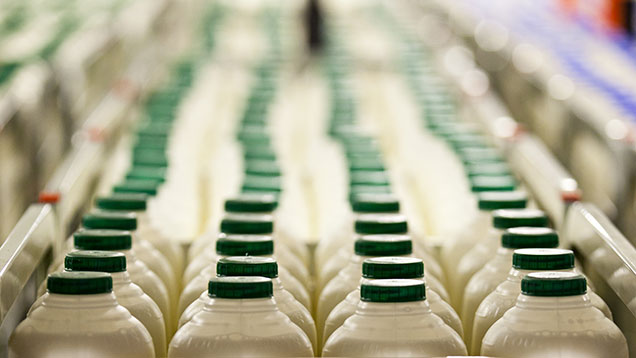 Milk processor Dairy Crest has suffered from the market crisis of the past year, with profits and revenues sliding significantly.

But adjusted profits were down only 7%, after stripping out exceptional costs such as restructuring.

Results in the dairies division, which is being sold to rival Muller Wiseman, were particularly painful. Sales were down 6.7% to £881.6m and profits dropped 90% to £1.8m.

Cheese and spreads performed much better, with revenues up slightly to £444m and profit up 19% to £66.9m.

CEO Mark Allen’s statement focused on the parts of the business that will be retained if company authorities approve the Muller sale.

He said it had been another year of “significant progress” for Dairy Crest, with cheese brand Cathedral City dominating the market and more than £20m of cost savings achieved.

“We have grown combined cheese and spreads sales despite the deflationary market environment,” he said.

“Completion of the [dairies] sale will result in Dairy Crest operating from five well-invested manufacturing sites.

“It will be a much simpler, more focused, predominantly branded business.”

Dairy Crest announced in November 2014 that it would sell its dairies operations to Muller for £80m.

The UK’s competition and markets authority is now reviewing the deal, with a first decision expected in June.

About 700 of Dairy Crest’s more than 1,000 suppliers will be switched over as part of the deal.

Farmers have been promised their contracts are safe.