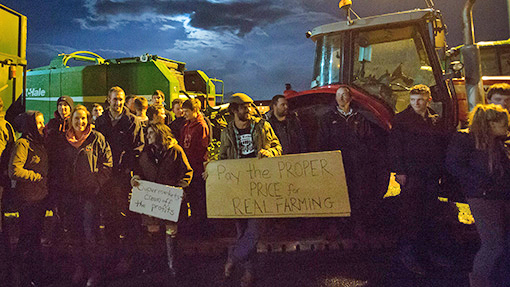 Dairy farmers have warned they will ramp up protests this week against processors and retailers over plummeting milk prices.

Farm lobby group Farmers For Action (FFA), which represents about one-third of dairy farmers, staged two protests this week against Muller Wiseman and Morrisons, evoking memories of the SOS dairy campaign in 2012.

Processors were paying 34p/litre in May, but many were offering 27p/litre from 1 November. However, current costs of production remain above 30p/litre, meaning dairy farmers are losing thousands of pounds.

He said he counted 116 articulated lorries backed up on the motorway when he left the protest against Morrisons on Wednesday night.

“It caused a lot of disruption and that was only after three or four hours of protests,” said Mr Batten. “The first two protests were all about getting our message across and getting the media and TV involved.

“Now we will be cranking up our activity – there will be more ‘hits’, more farmers and more farm machinery.

“We could be talking about protests lasting 24 hours. If anyone is under the illusion that we are going to lie down and roll over, they’re wrong. At the end of the day, it’s our livelihoods that are at stake here.”

Mr Batten warned that protests would continue until Christmas – and possibly beyond – until processors and retailers stopped the slide in farmgate milk prices.

The NFU has come in for criticism from FFA and some farmers for not doing enough to help struggling dairy farmers.

Rob Harrison, NFU dairy board chairman, said: “We are trying to do all we can, but we need to do more.

“This is a global milk crisis and dairy farmers in other EU countries are going through a lot of pain, especially in the Balkans. One organisation in a tiny country cannot affect it [global prices].”

Mr Harrison predicted that the next 12 months would be tough for many dairy farmers, but prospects in the long term were good.

“In the medium-term, it’s going to be a bloodbath. But the long-term is positive. There is still demand for milk,” he said.

“It’s just getting through the next 12 months. It’s going to be really, really hard. Some farmers are going to cope better than others.”

He insisted that protesting was “not a long-term solution” and that over time there could be issues with policing and, potentially, “a lot of tanks tied up with farmers’ milk not being delivered”.

Independent dairy analyst Ian Potter said a number of factors were to blame for the current crisis, including the slump in global dairy commodities, oversupply and the Russian trade embargo.