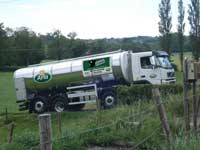 Chief executive Peder Tuborgh said: “The results show we have put the recession behind us and we’re in control of our costs.” Arla said it would seek continued growth through partnerships, acquisition and mergers in 2011.

Arla Foods UK saw sales reach £1.5bn in 2010, close to the previous year’s performance. Peter Lauritzen, chief executive of Arla UK, said: “Despite our many successes, 2010 was a year of many challenges, several of which will continue to impact the business in 2011. For example, the own-label milk market remains highly competitive, the economic environment is very unpredictable due to low consumer confidence and the prices of utilities, plastic packaging and fuel are rising.”

Arla’s key UK brands – Lurpak, Cravendale and Anchor – grew in value and volume in 2010 and stepped up the ranking in the UK’s top grocery brands.

During the year Arla revealed it was to join First Milk and Milk Link in Westbury Dairies, and Aylesbury, Buckinghamshire, was to be the site of its new £150m, billion-litre dairy.

The co-op announced last week it would increase its farmgate milk price by 2p/litre from 1 March.