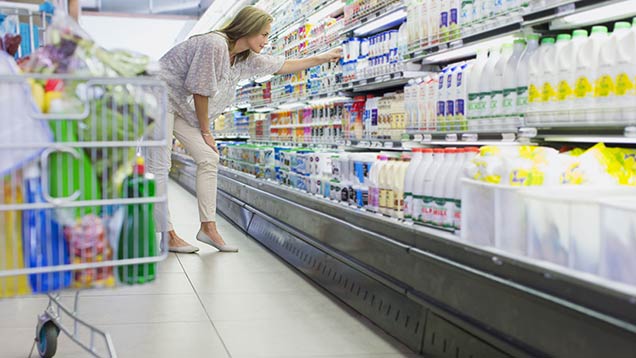 The average price of an own-label four-pinter has already dropped from £1.28 to 98p in the last year.

But there were lessons to learn from the bottled water market, where Volvic and Evian hold 24% of the market despite charging shoppers twice as much as unbranded options, Mr Garner said. This approach could work well in premium sectors of the market, such as yoghurt and flavoured milks.

Yoghurt sales jumped 1% by value in the past twelve months, while flavoured milk sale values rose 4.9% – even though volumes of both fell.

Mr Garner told the conference the grocery sector was dividing rapidly, with good growth from premium Waitrose and discounters Aldi and Lidl, while other retailers’ sales stayed flat or declined.

Heavy, perishable milk was the perfect loss leader as supermarkets tried to tempt back shoppers, but it was not clear the discounts were working.

Asda, with the cheapest four pints of the big four at 89p, has seen fresh milk sales fall 3% by volume and 13% by value in the past year.

“Retail turmoil is irreversibly changing the landscape and milk is caught in the crossfire.”