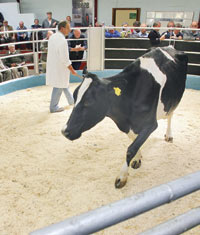 Demand for in-milk heifers and cows as well as those in calf remains strong, as prices in recent weeks hit highs of more than 3200gns.

Holstein trade at Carlisle has seen heifers in milk average almost £2000 and cows £1500, with a top price of 3200gns being paid for an August calved Derry Promotion daughter.

Trade at a recent mid month dairy sale at Beeston Castle had to be split over two days due to the number of entries, but prices still reached a top of 2500gns.

Wright Manley auctioneer, Stuart Hassall says although trade slowed over August, the demand during September was strong. “Demand has been for everything. In-calf cows have been selling well, along with freshly calved cows. It seems all cows are keenly sought as many people want to buy winter milk to keep their output going throughout winter,” he says.

However, with choice limited and no indication of demand changing for replacements, Mr Hassall says there has been a rise in the number of people importing from Europe. “For a price of £1300 for a cow delivered on farm from Europe, some people are turning to the continent for stock.”

Demand for dairy bull calves, however, has dropped because of the volumes coming on to the market. “We’ve had about 300 black and white bull calves passing through the ring, with those going for processing selling for £24-25, but still the best black and white bulls calves would be making £160-170,” he says.

However, the big trade topper last month was the 18,500gns sale at Holsteins UK’s Sale for the Century, held at Beeston Castle Auction. It was the quality of stock and well known pedigree names that created a trend of high bidding.

Taking the top spot was the October 2007-born heifer by Braedale Goldwyn and out of Smiddiehill Durm Ashlyn, Sterndale Ashlyns Gold. A 12,000gns bid was seen for another Braedale Goldwyn daughter, Homland A Goldwyn Pledge, a February 2009 heifer, with a PLI oh £167.