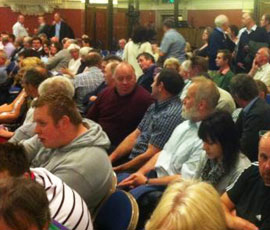 A coalition of farming groups has demanded the reversal of all planned and recent milk price cuts at a packed emergency milk summit in London.

Around 3000 farmers are at the meeting in Central Hall in Westminster which has been organised by the NFU, with the support of all the main farm unions and Farmers For Action.

The meeting has been arranged following cuts in the farmgate price of milk from Arla, Wiseman, Dairy Crest and First Milk.

In his opening address, NFU deputy president Meutrig Raymond said farmers had been pushed to the brink.

But he said an NFU survey showed that 62% of public said they would willingly pay 5p a pint more if that ensured farmers get a fair price.

Mr Raymond said retailers claimed to support British dairy farmers, but it was time to prove it.

Retailers must stop buying milk from processors who pay less than the costs of production to dairy farmers, he said.

Farmers For action chairman David Handley told the meeting that the dairy industry was “being screwed every day of the week”.

Unless price cuts were reversed by 1 Aug then farmers would take action, he warned.

The clock was ticking and unless thing changed farmers would “show them what we are capable of”.

Have your say – should farmers dump milk?

See what people are tweeting about the milk crisis summit below