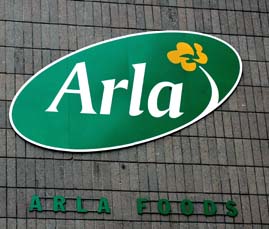 “I don’t think dairy farmers got a good deal at all. They have no guarantee they’ll get a return on their investment and no promise that they’ll get a share of the company in future. Asking farmers to spend their money on this basis means the company got away pretty lightly on the arrangement.

“Many Arla UK producers are also unhappy that they were not well represented during the discussions. Some NFUS members are now considering leaving Arla to join Milk Link which is now expanding its Lockerbie Creamery.”

However Arla UK’s head of milk procurement, Ash Amirahmadi, who was speaking at the conference, insisted that farmer representatives were not chosen by the company but by other milk producers, and added that time would tell if committing to the levy was a good or a bad decision.

“I think it’s a fantastic deal,” he said. “The Danish, Swedish and German farmers came in without any guarantees. And farmers can leave if they choose and get their investment back, so there is protection there for them.”

Mr Amirahmadi added that Danish and Swedish farmers would need to be confident UK farmers were “ready for the journey” before granting them full membership of the co-operative.

NFU Scotland milk policy manager George Jamieson said that despite the long consultation period with producers, many farmers were still unhappy with the levy.

He added that the monthly deduction – which can amount to thousands of pounds – could only be recovered in instalments on the third, fourth and fifth anniversaries of ceasing to be a member. He said the union would be raising members’ concerns with Arla representatives.