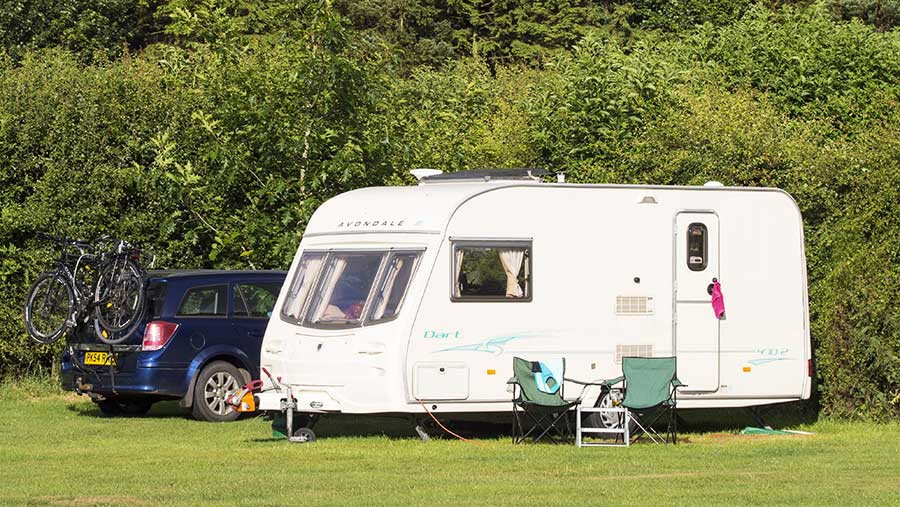 Margaret Beckett and her husband Leo may be agriculture’s best-known caravanning couple, but they are just two of a growing number of people who own a caravan.

Equally, relatively few folk have room to keep these bulky items on their own drives, so there is a clear need for someone else to store them.

Looks like an easy way to make a bit of extra money? Yes and no, says Ted Young from the Caravan Storage Site Owners Association (CaSSOA).

Having 10 or 20 caravans to earn a bit of pin money is straightforward enough, but if you want to make a more substantial enterprise of it set-up costs may be more than you expected.

One thing that’s undeniable is the remarkable jump in the numbers of farmers offering caravan storage.

Some 70% of the association”s 300 sites are operated by people involved in farming and levels of enquiries from farmers thinking of starting up are running at record levels.

It’s a sector that has traditionally included a lot of so-called back-pocket businesses, who pay no income tax or business rates and probably haven’t got planning permission either.

But CaSSOA says it is working hard to get the industry to put itself on to a more professional footing and, in the process, improve levels of site security.

So what is involved? Location, cost and labour input are all important in their own way, but the three things that could scupper your fledgling site are planning permission, business rates and security.

Planners are not wild about diversifications involving caravans, citing (with some justification) their tendency to stick out like sore thumbs.

So if you are planning outdoor storage, have a good landscaping scheme ready that uses indigenous tree and plant species, hire a landscape architect if necessary and make sure the caravans can’t be seen.

Indoor storage is less likely to cause offence, but you’ll probably still have to do some screening.

Be upfront with the planners, too, and expect trouble from Highways if the farm access is on to anything other than an arrow-straight main road.

Tempted though you may be not to, prudence dictates you should let the Valuation Office Agency know about your new business. The dangers of keeping quiet include a big back tax bill at some point in the future.

The problem is that the VOA assesses the rateable value (RV) of a building according to what it could be used for, not what it actually is used for.

So RVs for a barn tend to be pitched at what it would get for higher-income activities like storing antique cars or furniture rather than relatively low-revenue caravan storage.

A typical 8000sq ft steel portal building, for instance, could attract a £6000 business rate valuation. At the current 42p in the pound multiplier, that would mean an annual bill of £2520.

And Mr Young has encountered figures much worse than that.

“He planned to charge £300 per caravan, so his gross turnover would only have been £19,500. That means the rates bill alone would have practically wiped out any profit. It stopped the project dead in its tracks.”

Business rate relief of 50% is available on enterprises with an RV of less than £6000 (expected to rise to £7000 in April) for a period of five years. That could be helpful to small operators, but not much use for larger ones.

You may not think this is a problem in your area, but you need to consider it at the outset. Like ATVs and livestock trailers, caravans rank pretty high on the average felon’s list of must-haves.

“There’s a common belief that a determined thief will get through any amount of security,” says Mr Young. “That’s not true. If you want to stop them you can.”

An ideal set-up for outdoor storage would involve a 3m wide, 1.5m high mound as the outer layer of defence. Inside that is a 1m wide, 1m deep trench and then a pair of 1m high post-and-wire-mesh fences with a 1m “sterile zone” between them in which lurks a beam sensor.

The typical £3000 cost of a good beam system is substantial, but most of the other work can easily be done by farm labour. CCTV cameras can be added, but they are no good unless someone is monitoring them.

Make sure you have a substantial gate, too, and be wary of using razor wire – it signals you may have a security problem.

It is the responsibility of the owner to insure the caravan, not you, emphasises Mr Young. Don”t accept an uninsured caravan – if it is stolen from the site the owner may well try to sue you.

If there is evidence of negligence on your part he could win, too. You will need public liability insurance (typically £600-£800 a year for 200 caravans), as the public will be coming on to your farm. Think about fire precautions, too.

Both caravan sales and caravan holidays are booming, so there is still strong demand for storage, says Mr Young.

But new sites are being established all the time, he says, and saturation point could be reached in some areas within two years.

Charges are variable and depend on location and local demand. Figures of £150 a year for inside storage and £250 a year outside are typical for a quiet area in the Fens, whereas £200 a year inside and £300 a year outside would not be unusual for a high demand area like the West Midlands.

Other costs? £1000 for a secure door for a barn, £300 for a security bollard and £140 for a really good padlock are typical. Expect to pay £45/m for outdoor security fencing.

Keep labour requirement to a reasonable level by operating sensible hours. 9am-5pm, including weekends is fine; there should be no need to offer 24-hours-a-day access.

Summer weekends can involve a lot of arrivals and departures, but keep on top of the job by insisting on 24 hours’ notice for movements.

All caravans made after 1992 have a CRIS registration number. Make sure you get it.

Inspect caravans for damage when they first come in.

Provides advice on all aspects of storage including planning permission, security, business rates, set-up and applying for RES grants. A site visit costs £120.