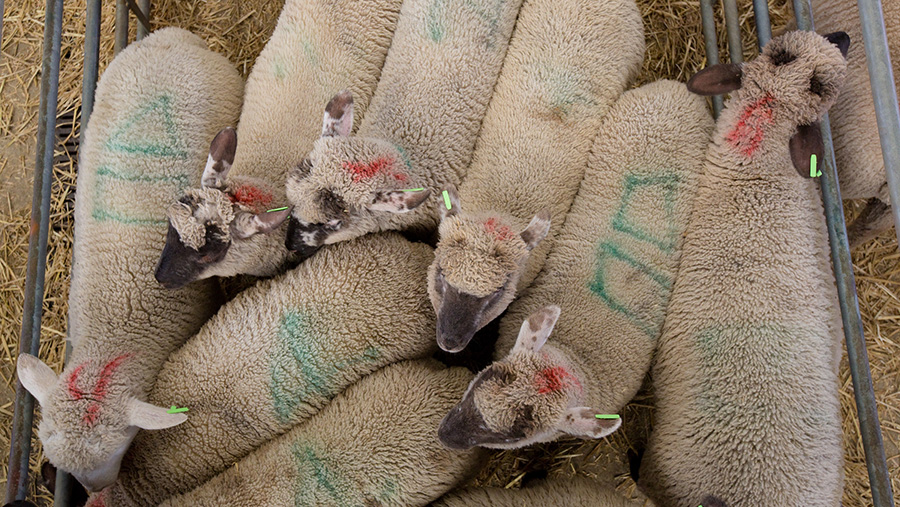 Early lamb producers who rose to the challenge of having top-quality lambs ready for this year’s very early Easter holiday have been rewarded with a good trade this week, with prices up 20p/kg.

But it is still good news for farmers that were caught out by the early Easter, with auctioneers predicting tightening hogget supplies in some parts of the country will help boost demand for the first real flush of new season lamb.

Early lambers in the South West have been trading for several weeks, but buyers were out in force at Exeter to put 537 head through the ring on Monday, where a top price of £108 was realised, with lambs averaging £98 (240p/kg) – 20p/kg up on the previous week.

“Lambs that had been out at grass and were straight off the ewes were making a premium, with a lot of traditional early season Dorset lambs coming through as well as the first of the season’s Suffolk crosses.”

And while the pre-Easter trade for new season lamb in the South West has not been easy, fewer hoggets now coming forward should help maintain prices as trade gradually switches over.

“I’m fairly confident early lambs will see a good trade in the next few weeks, but producers still need them to make £90-£100,” added Mr Steer.

“Easter is so early and a lot of traditional early lambers don’t have lambs ready.

“We’re currently selling about 400-500 hoggets a week, but numbers are getting tighter.

“I’d like to think new-season lambs will stay at about the 220p-250p/kg mark for the next few weeks so those who haven’t been able to have lambs ready for the Easter trade should still see a decent return.

“Where hoggets are running low there should be a benefit to spring lamb prices but it’s very hard to predict so early in the season.”

There had been fears that a lot of lambs would have been “too good” because of producers’ keenness to push them hard to hit the early Easter market, but auctioneers described the quality of lambs sold this week as “tremendous”.

While some heavier lambs up to 50kg have found a ready demand among local butchers, those with lambs on hoppers are advised to keep a close eye on body condition and not let lambs get too rich.

NWA auctioneer Ian Atkinson reported an overall average of 281p/kg with lambs between 38kg and 44kg in strongest demand.

“The main trade hasn’t switched over yet so this was a day for the butchers. Producers have had to push lambs hard to get them ready for this earlier Easter trade, but lambs were touching really well,” said Mr Atkinson.

Ashford Market in Kent has been selling new-season lamb at up to £98, but auctioneer John Rossiter said grass-reared lambs have yet to be marketed.

“Most of what we’ve sold has been pushed hard inside and some of the earlier-born lambs have been carrying a bit too much finish so producers need to be mindful of that.

“The really top-quality grass-reared lambs have still to come and they are the ones that will really give us an indication of the trade in the weeks to come.”

Although new-season lambs sold at Ashford are making about 25p/kg more than hoggets.

Mr Rossiter said there are still a lot of hoggets to come on to the market in the South and Midlands but he wouldn’t be surprised if prices lift as hoggets diminish and spring lamb volumes increase.