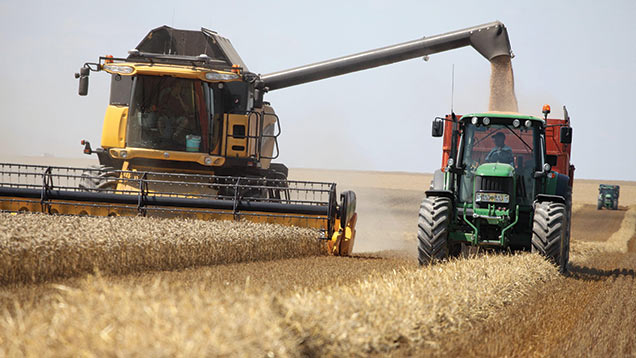 A mix of sentiments underpins the market as we near the European harvest, but for the first time in many months a grain price rise is on the cards, says Nidera’s David Eudall.

Markets are becoming edgy once more, as identified by the spikes in grain prices over recent weeks.

With grain supply and demand showing a comfortable stock level, weather has not been a factor affecting prices in recent times but things are changing.

The rally started with a period of dry weather for Canada, affecting growth of spring crops, and wet weather delaying the start of the US wheat harvest, with both giving rise to concerns about the size and quality of the 2015 harvest.

Through June, the majority of the US corn belt – Illinois, Indiana and Ohio – received more than 200% of its normal rainfall. By the end of the month the US corn crop rating had dropped to 68% good/excellent, down from 74% at the start of the month and 75% a year ago.

All told, the US winter wheat crop was 38% harvested by the end of June compared with an average of 46% for the same point in time. The rainfall over the Oklahoma/Texas border was at its worst in the mid-June harvest period.

While the American weather problems have rumbled on for a few weeks, the late arrival of a sustained heatwave over Europe has created stress for winter crops and spring crops.

French wheat crop quality, for example, deteriorated from 91% good/excellent in early June to 80% by the end of the month. The final toll of this heatwave will be seen in the next few weeks’ harvest.

The European heat has been the reason that a large proportion of traders who were short (sold) in the market have been buying back positions to reduce risk.

While the heatwave is unfavorable for the final stages of winter crop development across Europe, it would have been far more damaging four to six weeks ago.

In the grain-exporting Black Sea region, the weather has been more favourable, with a cooler, dry spell allowing early Russian harvest progress to catch up after a slow start due to rains. Early crop quality looks good, with specific weights above 76kg/hl and protein levels at 13%.

The bottom line is that since the turn of the year, grain markets had been quite comfortable with crop development as weather was looking good.

But as we moved from spring into summer, weather has become a real price driver with initial fears of crop damage, followed by the reality of unfavourable weather having an impact on final yield potential.

Those traders and speculators who were short (sold) were caught out by the sudden change in sentiment from being rather relaxed to seeing crops face real weather stress. Subsequent short-term market rallies have been sudden and very beneficial to producers.

While the impact of the weather may not be the same as in 2010 and 2012, when prices were pushed close to £200/t, at this point there is little reason for the market to return to the lows of earlier in the year.

Short-term the UK will be influenced by the wider European and US weather which is supporting the market.

However, the UK still faces a crop of about 15m tonnes and stocks of close to 3m tonnes and we still have to compete in export markets.

Unfortunately, given the supply that we see and when viewed against other new-crop sources, we are still too expensive.

Although global sentiment has been keeping markets firm, the factors of a substantial carryover, little new-crop farmer selling and a strong sterling may mean UK markets are sluggish in following any European-led rally.