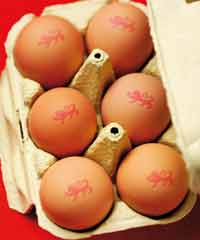 People are spending, on average, just eight minutes having breakfast – half the time they spent 20 years ago, according to a new survey.

Although eggs are a favourite for most people, the nation struggles to cook basic breakfast dishes. A third of people surveyed (33%) said they found it difficult to poach an egg and more than a quarter (26%) admitted that they can’t make an omelette. Nearly one-fifth (17%) even struggle to boil an egg.

Breakfast expert Martyn Nail, executive chef at Claridge’s, who cooks around 6500 eggs each week – over one-third of a million a year – is sharing his expert tips to trouble-shoot common problems people have when cooking with eggs.

Mr Nail said: “Eggs are a popular choice when eating out or at weekends, but people believe they lack the skills to enjoy them as a quick breakfast during the week. The great news for amateur chefs is that eggs can be quick and easy or can be dressed up to impress. Not only are they tasty, but healthy too.”

Martyn has also devised a selection of seven breakfast egg recipes, one for each day of the week, each as good as restaurant food but quick and easy enough to make at home.

His recipes will appear on egg packs in October and will also feature on a new website.