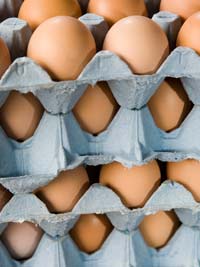 A Scottish egg producer has  been fined £600 for breaches of the food hygiene regulations.

Donald McEwan of Donalds Farm Eggs, Keith, was before Elgin Sheriff Court (7 June), where he admitted setting up an unapproved food processing plant.

The court  heard  that  for 25 years  the company  had  sold  egg  products  to the catering industry. But the difficulty  began when Mr McEwan branched  out and set up a new system to produce animal feed products, using eggs not fit for human consumption.

Evidence was given that the product was made using food processing equipment that  was not approved.

It was also found that the waste egg shells and hatchery products were being dumped on to neighbouring farmland and that  consignment  records were not being properly kept.

In mitigation, defence solicitor Robert Macdonald said: “This was something that he was doing as an experiment. He had not thought it through, that’s what it amounts to. The minute this was brought to his attention he immediately halted. He now disposes of all his waste by way of the compost plant.”