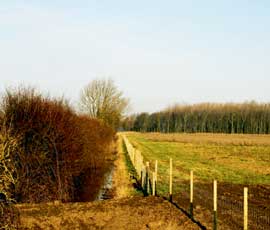 An unusual offering in North Lincolnshire will test the investment market for land in environmental schemes. The 252-acre block in six fields is in its second year of an Higher Level Scheme habitat management agreement and, subject to currency values, guarantees an income of almost £60,000 a year.

The former arable land is of Wallasea soil and lies six miles from Humber Bridge, to the west of the village of Bonby and is described by Natural England as “a fantastic creation, full of wildlife”.

Income on the land is split between £35,940 a year of HLS payments and £22,500 of single farm payment, subject to currency fluctuation. Its Lincolnshire owner is selling to concentrate on farming in the south of the county.

Stephen Hall of Savills’ Lincoln office has set a guide price of £5000/acre, or £1.25m for the whole to include sfp entitlements.

Based on this guide, the investment could yield a return of around 4.8%, including income from letting part of the land for extensive grazing on licence, subject to HLS rules being observed.

“This would easily cover the cost of borrowing on the land,” said Mr Hall, who expects the return to attract both farming and non-farming buyers.

“Although wheat prices look firm for the next two harvests, this offers a secure fixed income for the medium term, subject to currency fluctuation.”

A recent inspection by Natural England counted large numbers of the types of wildlife the scheme is meant to encourage, including almost 200 teal and mallard, more than 20 snipe and over 150 starling, a species which has seen a big decline over the past few years. The HLS agreement began in November 2009. (Savills 01522 508 933)