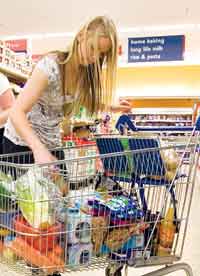 The era of cheap food is at an end, although the immediate outlook is more subdued with consumers continuing to watch their spending as the UK economy emerges from recession.

Addressing this week’s English Farming and Food Partnerships “routes out of recession” conference in London, the organisation’s chief executive Sion Roberts said that, since 2006, the affordability of food had deteriorated.

The “age of prosperity” had turned to the “period of uncertainty”, he suggested. But, with the economy now emerging from recession, the agri-food industry was entering the period of the “new normal”, with just a slow improvement in food affordability.

Mr Roberts explained that the recession had been deeper and longer than expected and consumer spending would be constrained by high levels of debt, rising unemployment and wage freezes.

“Over the next two years, we predict that food prices will remain generally subdued,” he said. “But do not be fooled. The need to increase global food production 50% by 2030 means that food prices are likely to rise, not fall over the longer term.”

The agri-food sector had a key role to play in lifting the UK out of recession, he added, given that it the sector was already benefitting from the weakness of sterling. And the new era would present lots of opportunities for food businesses to add value, by reducing waste, increasing efficiency and working in collaboration.

But attracting funding for new investment was still a problem for the sector, according to EFFP chairman Steve Ellwood. Despite some evidence that business confidence was recovering, banks still felt constrained as they sought to rebuild balance sheets.

“We believe there is a growing opportunity for investors at the interface between food and farming,” he said. As such, the EFFP was developing a new “brokerage” service, to try and plug this funding gap.

The agri-food sector could add as much as £1bn to its bottom line by improving collaboration along the supply chain, according to DHL managing director in the UK, Tim Slater.

Research had shown that the “best in class” companies in any sector were the ones who worked together as part of an integrated supply chain. These businesses typically achieved 50% lower logistics costs than average, worth £4.5m in extra profit for every £100m of turnover.

While the retail side of the food industry was good at this collaborative approach, too often the farming and processing side had a “silo mentality”. This led to lack of product visibility, poor delivery performance, rejected loads, overstocking and a prevalence of claims and quality testing.

Addressing these issues would deliver considerable benefits to the agri-food sector, said Mr Slater. “We conservatively believe that the prize for achieving a best in class supply chain is over £1bn a year.”