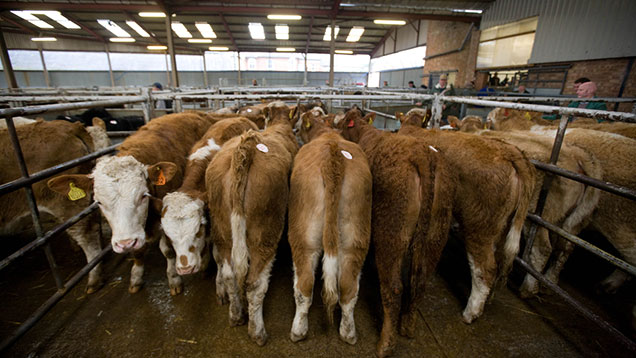 British beef and sheep farmers should benefit from one bit of Brexit uncertainty — the wobbling of the pound.

Worries over the UK quitting the EU caused sterling to fall 6% against the dollar and 7% against the euro in the first two months of the year.

The pound has recovered a touch, after plunging in the days after the referendum date was announced in mid-February. But experts predict the weakness to last, which offers some help to British farmers.

Sterling’s strength was one factor in the vicious cocktail that has caused most farmgate prices to plunge.

Britain’s beef would not look as expensive on European markets, compared with lower-priced competition from Poland and Ireland.

In the prime trade, the main worry of UK retailers filling their shelves with Irish beef should be dampened, Ms Butcher said.

She added that lamb producers could see the biggest direct price implications.

About 40% of British lamb is exported, with one-third going to France. This means exchange rates and farmgate prices are clearly linked.

“When sterling has weakened, the lamb trade has been holding up, it is doing OK,” she said. “Prices have not fallen over the part of the year as we might have expected.”

Big investment banks expect sterling to keep falling throughout 2016, whether or not the UK votes to leave.

Economists at UBS have warned the pound could fall to match the euro if Brits rejected the EU in the 23 June. At Thursday’s trading close (3 March), a pound was worth just under €1.30.

Deutsche Bank has predicted sterling could fall another 10% by the end of the year in the worst-case scenario, if Britain left Europe.

Lamb prices have been improving since mid-February, despite higher numbers reported at marts.

The British old-season SQQ rose a further 0.5p/kg to average 187.2p/kg in the week to 5 March, on a throughput almost 7% higher than the previous week.