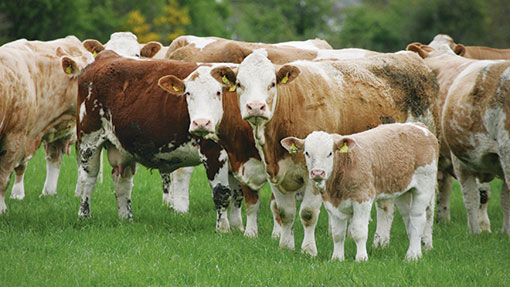 Beef farmers should take action to battle falling farmgate prices that are threatening their sector’s future, industry leaders have warned.

The deadweight price for all finished steers has fallen to 355.5p/kg, 41.3p/kg less than this time a year ago, when it was approaching a high in the wake of the scandal over horsemeat-contaminated products.

But while farmgate prices have gone down, the cost of beef on supermarket shelves has been creeping up, cutting the farmers’ share from almost 60% in May 2013 to 51.3% in March this year.

Mr Foot warned that the long-term future of the industry was in danger, if the financial returns were not clear for current farmers and new entrants.

“We work in an industry with a long production cycle and low margins and we simply cannot afford to be toyed with,” he said.

“It is a significant investment to buy store cattle, let alone suckler cows, so how is a farmer meant to do so with any degree of confidence when you can see prices slashed overnight?”

He urged farmers to talk to different processors and abattoirs to get a better price.

“Farmers need to think about their marketing and not just accept the first quote or necessarily where you always send them.”

“If our retailers do not want to sell British beef could they not just tell us, rather than playing a game?”

“I do not want UK farmers wasting their money to produce something people do not want.”

Mr Mallon said British farmers could take the risk and refuse to sell their cattle if the price was not right, as well as speaking to more than one abattoir to negotiate on price.

On the retailer side, he said British beef should be given higher priority on supermarket shelves, not mixed up with Irish and imported meat.

And he said there needed to be proper discussions with the retailers and processors, and a primary producer ombudsman could be recruited to keep an independent watch on the industry.