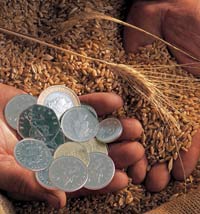 Farm borrowing hit another record high during the last quarter, according to latest figures from the Bank of England.

“Lending to agriculture continues to increase as farmers look to strengthen their businesses at a time of comparatively low interest rates,” Paul Spencer from Lloyds TSB and the Agricultural Mortgage Corporation commented. “It is clear that, almost irrespective of the sector, farmers have chosen to invest in their businesses – for example in grain drying or handling equipment or to meet requirements around NVZ regulations.”

AMC said its lending to agriculture had increased by 19% on the year to end of September, while Barclays national agricultural specialist Euryn Jones also reported lending to farm businesses was at an all time high.

“We have seen rises across all farming sectors, with the dairy sector showing the highest rate of increase.” That was due to a number of factors, including lower milk prices, farmers investing in new facilities, cashflow shortfalls resulting from the collapse of Dairy Farmers of Britain and some additional lending to new customers, Mr Jones said.

There was less of an increase in the arable sector, he continued. “Many arable farmers increased their overdraft limits in 2008 and have largely managed to live with those limits in 2009, although we have provided higher limits to some farmers who wanted to hold back from making crop sales while prices were low immediately after harvest.”

The beef and sheep sector saw an increase in borrowing requirements, largely due to higher prices meaning that farmers needed more working capital to pay for bought-in calves and store cattle.

Mr Jones expected farm borrowing to fall before the end of 2009 as crop and livestock sale receipts were paid in, along with this year’s higher single farm payment.

Deposits from agriculture fell slightly during the last quarter to £4.4bn, the BoE figures also revealed. That was some £516m lower than the third quarter last year.