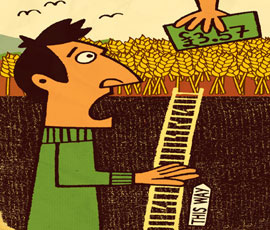 The calibre and skills of new entrants coming into farming must be improved and the career ladder given a radical overhaul to boost the industry’s professionalism, farm leaders have warned.

Large estate managers, industry leaders and new entrants attending a seminar on future career opportunities heard the message at an event organised by Fresh Start and RASE in London this week.

There were many new initiatives under way to create routes into farming, but speakers commented that too many young people were applying for tenancies and seeking finance when they were ill-prepared and not equipped to grow a farm business properly.

New entrants were often failing to come up with fresh ideas and were struggling to understand what the opportunities were for the landlord as well as themselves, delegates heard.

The selling off of county council farms was seen as a major loss by many, but the National Trust, Warwickshire County Council, Duchy Estates and Crown Estates remain committed to recruiting tenants and farm managers with the right talents.

George Dunn, chief executive of the TFA, called for major policy change to help would-be tenant farmers. He said he wanted to see the government get more involved in decisions around the sale of county council holdings, as they are already doing so in Wales. He called for more long-term lettings and retirement schemes to help older farmers retire more easily. “The current farming ladder is a broken and unstable system,” he said. “The free market has been inadequate and we need more intervention.”

John Varley, director of Clinton Devon Estates, gave a personal view that too much farming activity was about lifestyle and not business. He segmented farms on his estate under headings such as: Robust, expansionist, exploitable, high-value niche and those he described as “just holding on”, with no strategy, vision or opportunities.

Mr Varley urged the industry to think beyond the traditional tenant-landlord relationship. He proposed the setting up of co-operative contracting arrangements, built around new models where tenants and landlords collaborate in third-party arrangements to run two or more farms together.