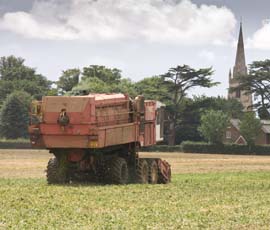 But costs rose 3.3% to £19.5bn last year and subsidy payments were 12% down on 2009 at £3.2bn, due to a less favourable exchange rate for converting EU direct aid payments from euros to sterling.

It was the second year running that TIFF had fallen and it was now 12% down on the high of 2008 in real terms, NFU chief economist Phil Bicknell said.

“Agriculture has been inevitably linked with the headlines focusing on booming global commodity prices and rapid food inflation. However, with the total value of UK farm output rising just 5% year-on-year, these latest statistics show that the world market peaks aren’t being seen at a UK farm level.

This was down to several reasons, he said. A significant proportion of the 2010 harvest was sold forward at prices far from current highs and farmgate milk prices had been slow to reflect stronger dairy commodity markets. Livestock prices also remained under pressure for much of 2010, he said.

“More importantly, the DEFRA figures highlight rising costs in 2010 for farm inputs. Feed, fuel and fertiliser have seen price rises continue into 2011, meaning many farmers will remain extremely cautious about the year ahead.”