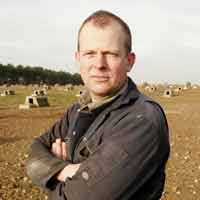 My foray into grassland management continues to be a minor disaster, aided by having no rain for at least a month. Thank goodness it was only there for ornament rather than feed.

The results from the first of our second litter sows are encouraging, for the 21 weeks of first litters we averaged 10 weaned from 11.1 total born. Early indications suggest we ought to be at least half a pig up on these figures with the second litters.

I thought we were doing quite well until I joined a visit organised by the East of England Pig Training Group to the Netherlands. There we saw indoor pig farms averaging 14 born and rearing, with the aid of some interesting artificial systems, about 13.

There are several farms weaning more than 30 pigs a sow a year. A large contribution to the excellent results is genetics. A cooperatively owned breeding company with access to a large population of pigs has made rapid progress in prolificacy, despite it being a trait of low heritability.

Netherland farms route to competitiveness has been phenomenal output from systems that could not meet basic farm assurance requirements in the UK. Our route has been governed by legislation, to major on high welfare at higher cost, which is a risky route when our short lived recovery in prices is undermined by some retailers insisting on selling foreign product from systems that are just not open to us.

The NPA has been effective at representing the pig industry at a political level. It is imperative that the forthcoming NPA elections are well supported; a lack of votes could mean changes are forced on the organisation that would make it much less effective. So every NPA member please vote as we could have too much to lose. Closing date is on Monday (19 October). Don’t let apathy be the winner.