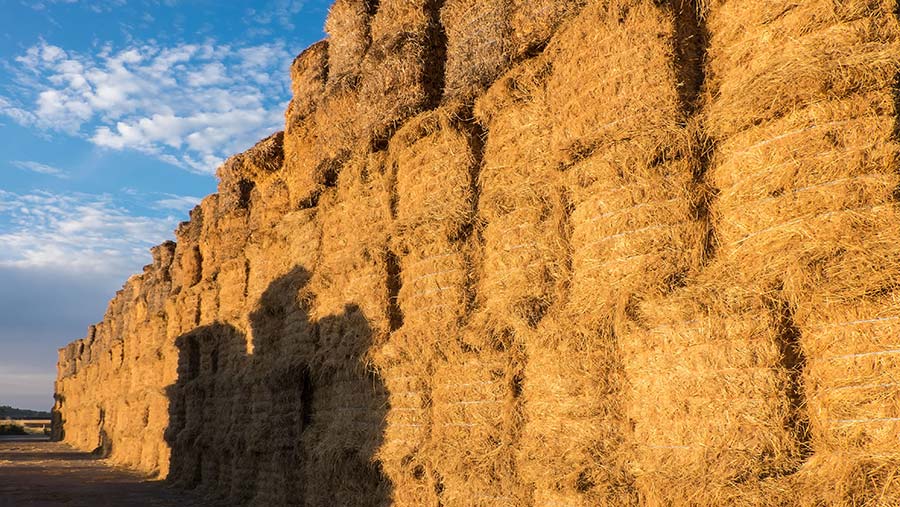 Spikes in crop prices caused by this summer’s drought could leave farmers at risk of losing thousands if stacks are under-insured.

Low yields have seen the prices of wheat, hay, straw and cereals double in some regions of the UK.

See also: How to review your arable insurance

However, many insurance policies will only cover stacks up to the value of £30,000, according to insurance broker Lycetts, which has urged producers to check they have the correct level of cover.

Lycetts says that splitting larger stacks and keeping them 20m apart was one measure farmers could take to spread risk.

Under-insurance is defined as inadequate insurance coverage that leads to losses to the policyholder as claims exceed the maximum amount stipulated in original policy documents.

The losses that emerge from a claim far outweigh the money saved from paying lower premiums for a smaller sum insured.

Therefore, the original policy was for just 50% of the actual value. When the insurance provider chooses to ‘apply average’ the payout will be 50% of the sum insured – £25,000.

“This summer has been a challenging one. The adverse weather resulted in low crop yields, which has inevitably pushed up prices and affected market values, said Lycetts director, William Nicholl.

“With so much to deal with, insurance may be the last thing on farmers’ minds but it is even more imperative that farmers are adequately covered, given the trying times.

“Some farmers may not be aware that the increase in wheat values, for example, means that their grain store is holding a higher value of wheat than in previous years, which would have an impact on the policy limit.

“And if a fire ripped through under-insured haystacks farmers could face losing thousands of pounds on a claim – with an even keener blow being felt if the farmer had to buy in or supplement the crop in question, due to poor harvests.”

Mr Nicholl added that he was particularly concerned about livestock farmers carrying large stacks of hay and straw for large headages of cattle, the value of which has boomed in recent months.