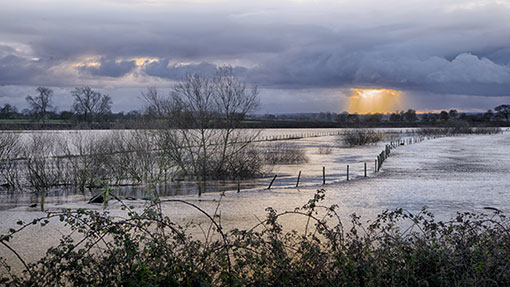 The weather is a subject never far from a farmer’s mind. But as the climate becomes ever more unpredictable, Jez Fredenburgh asks if UK agriculture is prepared for the road ahead.

Some 10,000-12,000 years ago humans first started sowing seeds and raising livestock – and no doubt cursed at the sky for the rain to arrive, the floods to recede, the air to cool and the storms to end.

No different from today then. Except in the 21st-century farmers face an increasingly unpredictable climate characterised by more frequent and severe weather. This will bring both challenges and opportunities, but are we ready for them?

“At the farm level, some still tend to think that we have been unlucky with the weather over recent years, and one day it will get back to ‘normal’,” says the UK’s global food security champion Tim Benton.

“The past, however, is increasingly not a good model for the future,” he warns.

On the flipside, climate change may provide a boost to upland grass, grazing and crop-growing seasons, home-grown markets and plant and livestock varieties. The only reasonable certainty then, is seasonal and annual unpredictability. It is for this that farming must prepare.

Call for a shift in mindset

Aiming to maximise returns over several years rather than one farming year will increasingly make more sense, argues Prof Benton.

“Maximising each year will not necessarily be a good strategy for maximising over five years if the farmer rejects crops or management that may be more resilient but lower yielding [in a bad year],” he says.

A change in mindset is therefore needed. Businesses must ask how they would cope with a situation such as a two- to five-year drought, followed by a wet winter like 2013-14, says Prof Benton.

Climate change should not just be seen as a threat however, says Jonathan Conway, director of research at the Royal Agricultural University. The UK is predicted to be less adversely affected by climate change than many more southerly countries, so opportunities to develop comparative advantage may emerge.

Combined with growing global food demand, the UK’s importance as a food-producing nation could increase.

Farmers have historically shown themselves to be good adapters and innovators, says Hugh Martineau, principal consultant at Ricardoo AA, which manages the Farm Advice Service.

More than 60% of UK farm businesses are already undertaking at least one climate adaptation practice, according to Defra figures, including 43% which have a soil management plan.

And those who include the risks and opportunities of a changing climate into short- and, importantly, long-term business planning, will be best placed to deal with negatives and maximise the benefits, adds Mr Martineau.

“Like anything in agriculture there are people who are doing it now and others will follow out of necessity,” he says.

Most agree that UK farmers have the skill, knowledge and technology to become more weather resilient and make the most of opportunities.

However, there is an urgent need for coherent and joined-up leadership, says Prof Benton.

“There are weak points throughout the system. Leadership, knowledge generation and prediction, knowledge exchange and knowledge uptake,” he says.

The difference between ‘climate’ and ‘weather’

“Very few in academia, policy or industry have really got their heads around how climate change will impact on farming systems.”

This uncertainty blocks farmers from making changes and is not helped by the government’s drive towards economic growth, argues Prof Benton.

This results in a focus on productivity rather than creating a resilient farm economy able to minimise risks and maximise opportunities.

Where is the support?

Many farm advisers are underinformed on climate change or simply not factoring it in, adds Mr Martineau.

Farmers can’t be expected to adapt in isolation, so proper investment in practical support is urgently needed.

More supply chain collaboration is also required, particularly from supermarkets, although many are starting to view climate change as an important factor in a secure supply chain.

“They need to invest on farm as it’s not just an issue which should fall on the shoulders of farmers,” says Mr Martineau.

No one wants to be told what to do, but leadership at all levels is yet to grasp the nettle and properly support farmers to make these difficult decisions.

Without this, just like the first agriculturalists, today’s farmers will have to rely on their own innovation to meet the challenges and opportunities of the next 10,000 years.