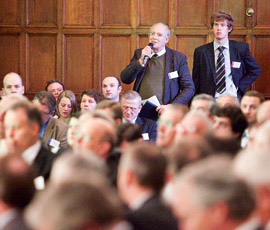 British agriculture could flourish if it left the European Union, according to a debate among farmers and industry representatives at the Oxford Farming Conference.

Conference delegates voted 196 to 185 in favour of a motion which said the UK’s farmers could thrive outside the EU during the annual conference debate on Wednesday evening (4 January).

Stuart Agnew, UK Independence Party MEP for the east of England, who proposed the motion, argued that UK agriculture had been over-burdened with red tape by being a member of the union.

He claimed there were more trade opportunities for British farmers outside Europe in countries like Japan and that leaving the EU would not leave the UK with less power internationally.

“We run a trade deficit with the EU as we buy more than we sell,” he told delegates. “The EU desperately needs our custom and won’t mess with us.”

NFYFC vice-chairwoman Milly Wastie, who seconded the motion, said UK farmers were not on a level playing-field with other European countries despite being allied to them.

“The grass is greener on the other side, we could operate outside the EU and produce our own rules,” she said.

“We could have the freedom to embrace new technologies such as genetically modified crops and form our own agricultural policy.”

“It would wreak catastrophe on the British farming community,” he said as he opposed the motion.

“We would become more dependent on Europe but wouldn’t have the input. We would be an ignored voice.”

Seconder Mark Houlton of NFYFC agreed leaving the EU would put the UK at a disadvantage in terms of trade.

“Alternative markets may only be found in places which involve much higher costs of transport to get food out there,” he said.

“There is no alternative which would provide a sound, viable future.”

The last word went to Essex farmer Guy Smith: “This motion is in the land of fantasy, in the same way I fantasise about the RSPB and [girlband] the Sugababes.