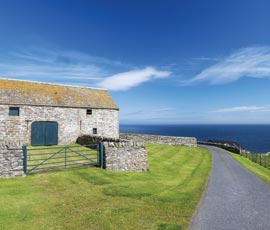 Rural property delivered another year of strong growth for investors in 2012, narrowly missing out on a second year of double-digit returns, according to Carter Jonas and Smiths Gore, sponsors of the IPD Rural Property Investment Index.

Total return was 9.9%, although once again almost all this came from capital growth of 8.2%. Income return was just 1.6%, remaining for the third year running at its lowest point in the index’s 32-year history. Total return beat bonds and both commercial and residential property, only just being overtaken by the rally in equity markets.

Transaction activity had a strong effect on performance, driving total annual returns up to more than 12% within the portfolio. There is demand from farmers looking to expand and from individuals looking to protect their wealth as well as investment funds, said Giles Wordsworth, head of Smiths Gore’s farms and estates agency.

Over the past five years, rural property has returned 8.9% per annum, against 0.7% from commercial property, 4.6% from residential, 2.1% from equities and 8.8% from bonds.

Richard Liddiard, head of rural agency at Carter Jonas said that rural property had continued to stand out as an attractive capital hold since the downturn. “While values for commercial property almost halved in some areas and the volatility of equities deterred risk-averse investors, rural property values only dropped 0.4% in 2008 and have risen by an average of 7% per year since the start of the recession in 2008.”

For the £2.7bn of assets measured by the index around the UK, which includes the Crown Estate, better prospects for farming have underpinned this capital growth, as well as the increasing appeal to investors of the potential for alternative use such as renewable energy.

Lack of investment-grade property to buy remains a hindrance, with significant activity happening off-market. For smaller private investors, there are more opportunities, although lack of supply and stronger demand remain the key drivers of capital growth, said Tim Jones, head of Carter Jonas’ rural division, at the presentation of the Index.

Providing the beneficial tax status of the sector, with IHT for own-occupied land, remained in place, this was unlikely to change, he said. Equally, the “long game potential” – whereby a development opportunity such as a shopping centre or housing estate 20 years in the future – can considerably hike up returns.

Richard Liddiard of Carter Jonas adds: “The continued strength of rural investment property shows that it has a serious part to play in investment portfolios that need to off-set volatility and risk with stable, solid performance.”

Keep up to date with the latest business news