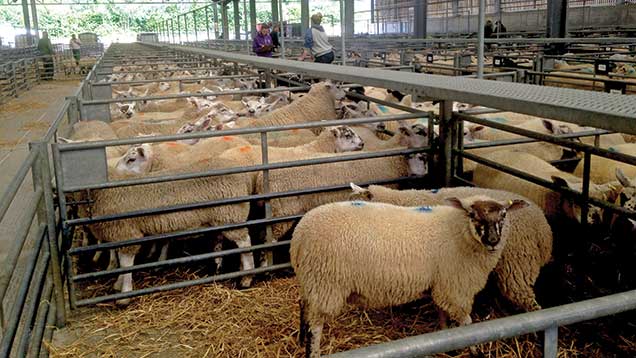 Many sheep farmers are now selling lambs at a loss, as finished prices slumped again this week and show few signs of recovery.

Auctioneers report producers are disappointed with trade – the worst for the time of year since 2009.

Fat lambs are worth about £10 a head less than last year, though this is up from a £20 gap in the spring.

“The worrying thing is that the glut of September is not here yet and the trade is already low.”
James Little, Harrison & Hetherington

But he said the main challenge – a tough exchange rate for exporting to Europe – showed no sign of shifting.

“The general feeling is that farmers are not satisfied with the prices, but there is an acceptance that this is going to be the [season’s] trade,” Mr Little said.

“The worrying thing is that the glut of September is not here yet and the trade is already low.”

Farmers Weekly reported from Tuesday’s sale at Ashford market in Kent, where the 1,800 lambs sold averaged 145p/kg – about 7p/kg down on the week.

One farmer said the current trade was more like “giving away” than “selling”. Another, who still had two-thirds of his 1,500 lambs to sell, said he was simply left hoping for any profit this year.

But he said store sales, which start this Friday at Ashford, might help the supply side by taking out the lighter lambs for further fattening.

Buyer confidence might be dented by the finished trade, but stores had been good business in previous years and there was plenty of grass around, Mr Davies said.

This year’s price collapse will be another blow to profitability.

Returns are well below the average cost of production, which was 216p/kg liveweight for a lowland flock in the most recent AHDB figures.

He said even the lowest-cost producers would be struggling to turn a profit.

“On average, sheep farming returns a loss [before subsidies] even in the past few years,” Mr Heyhoe said. “Take £10 out of the lamb price and the situation is very difficult.”