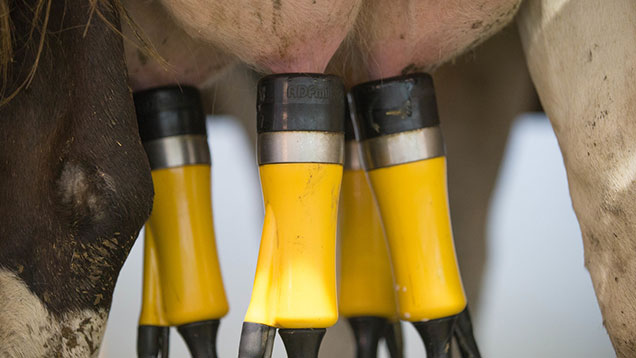 Better feed use is the main step dairy farmers can take to help their finances in the current downturn, consultants have advised.

The average herd in Promar International’s farm business accounts would have lost £498 a cow from their gross margin if their milk price had fallen 6p/litre since the spring.

But the fall in feed costs on the back of dropping cereal and protein prices would only deliver savings of £142 a cow.

Promar International managing director James Dunn said farmers should look at how they could reduce feed quantities, maybe making more use of home-grown forage, buying in fewer roughages or getting more milk from the same feed cost.

“It is about getting in control of your feed costs,” Mr Dunn said. “They are things we talk about every year but with the milk price where it is going there needs to be more of a focus on doing these things.”

The figures showed a broad range of feed efficiency. Among farmers feeding 3,000kg of concentrate a year, some were achieving 6,500 litres a year, while others were getting as much as 9,500 litres.

Mr Dunn said the best performers had made improvements in a range of areas, including cow health, fertility, genetics, forage quantity and quality and dry matter intake.

Looking at fixed costs, the average-performing herd had 35% higher paid wages than the top quarter of producers – despite an almost identical herd size and yield.

Machinery costs in the average business were also 25% higher. Mr Dunn said labour and machinery were two key areas were savings could also be made.

“That is where the real money in terms of efficiency is,” he said.

Farmers need to maximise their milk cheque as there is no sign of a dairy market upturn in in the coming months, according to Promar senior consultant Tim Harper.

He said there as now a complete disconnect between the on-shelf price for liquid milk and what farmers were paid and there was little chance of improvement until the cost-cutting retail environment changed.

Processors had committed to buying all of the milk their farmers produced so, with high production levels across the UK, anything exceeding customers’ demands had to be sold on the spot market or stored expensively.

“We are not expecting dairy commodity markets to return to an upward trend until around quarter three next year, even if the Russia ban is lifted in the mean time,” Mr Harper said.

“In the short term it is unlikely [farmers] are going to have the opportunity to change milk buyer, so they will have to focus on the details of their milk contracts.”