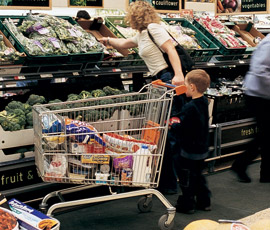 Food and agriculture companies need to take the lead in collaborating with farmers to secure supplies and increases in productivity, says global banking group Rabobank.

A lack of agricultural investment in farming infrastructure, research and knowledge has created a vulnerable food market was we approach the challenge of feeding nine billion people by 2050, it said.

Price pressure on both ends of the value chain had left farmers trapped and limited their ability to increase productivity.

“The next decade will be dominated by a battle for raw materials,” said Gilles Boumeester, global head of food and agri coverage of Rabobank. As larger players try to carve out their own piece of the raw material pie, the commodities market will break up into separate controlled supply chains.

“This has placed private enterprises in the driving seat when it comes to solving the dilemma of how to create stability in the vulnerable food supply chain.”

For some food businesses, securing supply was more of a challenge than price, said the bank’s Carel van der Hamsvoort, global head of food and agribusiness research advisory.

In the EU, as well as securing a safe food supply, the challenge was about how to add value. Best use of water resources, accounting for the carbon impact of food production and best choice of variety were all important issues which needed investment.

• In 1970, global funding of public and private agricultural research was estimated at about US $40bn a year

• Retail food prices are one-third lower than when our grandparents were alive even though agri-commodity prices have reached record levels – Rabobank.