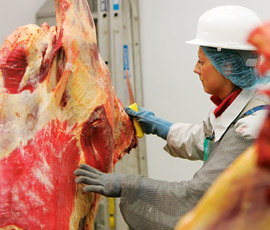 Last year, 410 samples were tested for meat authenticity by local authorities in England, of which 90 samples were found to be “unsatisfactory” for a variety of reasons, the agency said.

There were 10 products with 100% substitution of one meat product with another, for example rogue pork meat found in beef and chicken, was discovered – although none of these involved samples of horsemeat.

The results were gained from food authenticity tests carried out by local authority health officials on meat products in 2012 before the horsemeat scandal rocked the meat industry in January this year.

Inspectors were finding “unacceptable” levels of meat not identified in products before the scandal broke, an FSA spokeswoman said.

But she added that the results were likely to be artificially high and not representative of meat products found on supermarket shelves.

“Although the tests included an element of random testing, the local authorities will be using intelligence to direct their activities to those businesses most likely to be non-compliant,” said the spokeswoman.

“The results are therefore higher than you would expect if you were carrying out a random test of food on sale across the UK and shouldn’t be viewed as a representative sample.”

The spokeswoman said the figures were provided by local authorities as part of a report on food authenticity and did not give a breakdown of meat products identified as either packaged or produced in the UK, the spokeswoman said.

The FSA announced last week that it would be reviewing its handling of the horsemeat scandal to investigate its response to the adulteration of processed beef products with horsemeat and pigmeat. The findings of the review, to be carried out independently of the agency, will be reported in June.

The government has also announced its own “wide-ranging” review of the scandal to “restore consumer confidence in the food supply chain”.

But shadow DEFRA secretary Mary Creagh said the government’s fragmentation of the FSA in 2010 left the UK’s food regulatory system “unfit for purpose”.

“The FSA knew that the Irish were testing for horsemeat last November, yet did nothing until positive results came back,” said Ms Creagh.

“The FSA also needs to explain why 14 horses that tested positive for bute entered the human food chain before the FSA issued a recall notice.”