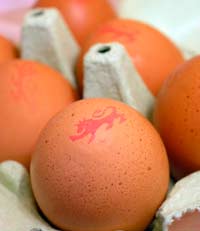 Free-range egg farmers have expressed their disappointment in the recent cut in prices paid by two major packers.

Noble Foods and Fridays have both cut rates on the back of falling feed prices. As outlined in the September issue of Poultry World, UK feed wheat at the end of August was down to £84/t, a drop of £13/t on the month, and of £34/t year on year. DEFRA’s announcement of a 150% rise in on-farm wheat stocks, along with continued reports of better-than-expected EU harvests, has pulled wheat prices down.

Responding to the cut, BFREPA chairman Tom Vesey said he was disappointed by the cut in prices, but could understand why it had happened.

“With feed prices down it is understandable,” said Mr Vesey, who said that producers expected payments to increase to reflect increased feed prices so should not be too surprised when payments fell as a result of a fall in feed prices.

Noble has reduced payments by 3p per dozen on very large eggs, 3p on large eggs and 1p on medium eggs. The reductions equate to a weighted average cut of 2p per dozen. Fridays announced the same cuts.

However, Mr Vesey highlighted that cutting prices would be counter to production in terms of attracting new producers, or enabling existing producers to expand.

He pointed to a need for expansion within the free-range egg sector to help fill the gap created by the ban on conventional cages in January 2012 and Mr Vesey said it was one issue packers should consider before cutting producer payments.