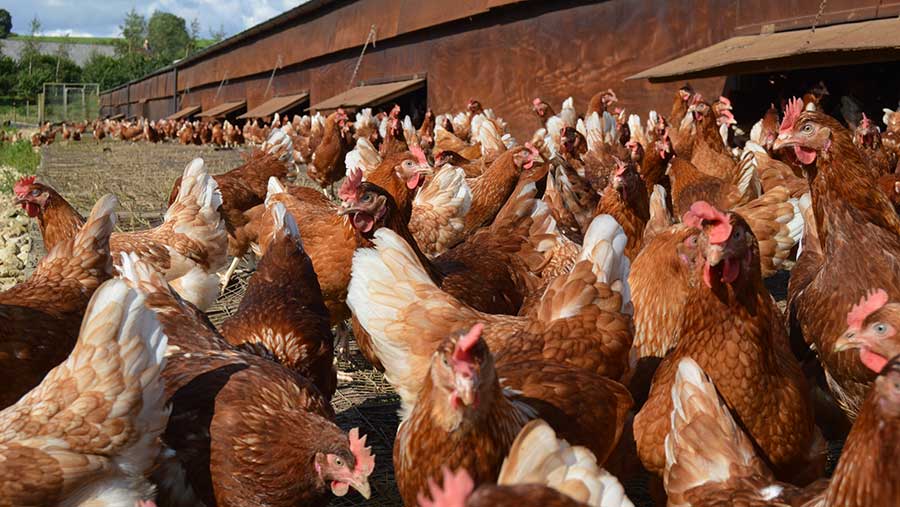 The free-range egg industry has warned that the sector is at risk of supply outstripping demand, putting downward pressure on farm gate prices.

Defra statistics show that free range eggs accounted for 51% of throughput in the first quarter of 2018, which is three percentage points higher than in Q1 2017.

See also: All major retailers committed to cage-free eggs by 2025

Robert Gooch, chief executive of the British Free Range Egg Producers Association (BFREPA), said that over the past three years existing producers had got bigger and there had been a large number of new entrants to the industry as people sought to diversify.

This meant the sector was now at a “tipping point”, with a risk that it could overshoot the market and suffer price cuts later this year.

“Over the past three years the free range industry has been growing at 10% a year, but overall egg consumption has been increasing at only 5%,” he said.

“So we think its unsustainable and we think we are at risk of over oversupplying the market which will have terrible consequences in terms of egg price.”

Mr Gooch said retailers announced last year that they were moving away from caged eggs from 2025 and there had been general misunderstanding that this meant eggs from caged hens would be replaced with free-range.

BFREPA’s conversations with retailers suggest, however, that they intend to meet their commitments by shifting to eggs produced in barn systems.

This will be more cost-effective and so help supermarkets to keep delivering a “value” product.

Mr Gooch said producers were often attracted to free-range egg production as an enterprise as it had the lowest capital requirement of all the systems.

But it was vital that farmers took independent advice on budgets.

According to BFREPA’s latest figures the margin (excluding finance and deprecation) is £1 a bird, but  rent and depreciation take that to a loss of £3.04.

BFREPA publishes updated costings on its website each month.

Mr Gooch stressed that the free-range egg sector was still growing and there was no doubt that consumers liked the product.

“The question is how we make sure that we don’t overdo it and keep free range growing with demand and not exceeding demand.”