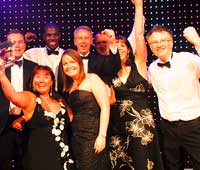 Farmers Weekly has once again triumphed in the Association of Online Publishers Awards in London this week by winning two major prizes for excellence with our website www.fwi.co.uk.

We won the Editorial Team of the Year Award and Online Editor Julian Gairdner was recognised as Digital Editorial Individual of the Year.

The independent panel of judges said: “FWI’s editorial team demonstrated a great knowledge of their market and passion for their subject and audience, with whom they showed deep engagement in the past year.”

Last year, FWi beat The Sun‘s website to win AOP Online Community of the Year. Farmers Weekly is also competing for four other national awards at the end of June.

The magazine, the website FWi, editor Jane King and publishing director Trevor Parker have been shortlisted in four separate categories in the Periodical Publishers’ Awards 2009.