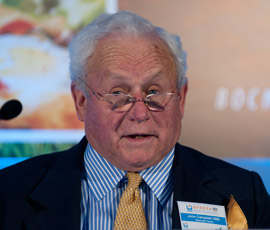 Scotland’s largest egg producer/packer, Glenrath Farms, has described it’s financial results for the year to 31 May, 2011 as “satisfactory”, despite a 4% fall in turnover and a 40% drop in pre-tax profits.

The market had been especially challenging during the period, said chairman John Campbell in the company’s annual accounts, with significant overproduction of shell eggs and rising costs.

“There has been significant expansion in Scotland and Wales that has been fuelled by government grants,” he observed. “As a result, the company has been unable to secure any price increase from our customers.”

The market for second quality eggs had been especially depressed, with values falling from 53p/doz to 7.5p/doz at one point during the accounting period. “These eggs represent 10% of production and therefore this does impact on the company’s turnover and profitability,” said Mr Campbell.

“Another contributing factor has been our hesitation over expansion into our own branded eggs. However, this has now been rectified with the launch of two brands – Kitty Campbell’s free-range eggs and Cage Free eggs. Early sales figures have been highly encouraging.”

While sales volumes actually increased, with Sainsbury’s acquired as a new customer, turnover fell by 4% to £43m, and pre-tax profits dropped 40% to £4.7m. This followed 20 years of sustained growth.

“The company continues to generate a positive net cash flow, whilst company net assets have grown by 8.6% to £41.9m,” said Mr Campbell. “Given the circumstances, the board consider the results for the year to be satisfactory.”