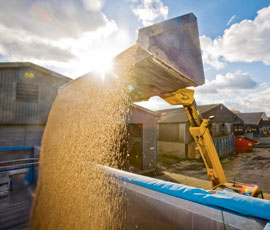 A more bullish sentiment has returned to grain markets following the festive break, as supply and demand fundamentals have come back to the fore.

The main driver has been concern about the impact of dry weather on corn (maize) establishment in Argentina and Brazil, which sparked a rise in US markets pre-Christmas and had knock-on effects for global feed grain markets.

“At the end of 2011 sentiment towards commodities was depressed because of the eurozone crisis, but the past couple of weeks have seen supply and demand concerns return as the main driver of prices,” HGCA senior analyst Jack Watts said.

The trade had expected record maize crops in South America this season and any crop problems would mean more demand for US maize to fill the gap and put pressure on underlying tight world stocks, he said. “The outlook is hugely uncertain though and will depend on the weather over the next month or so.”

Next Thursday’s (12 January) US Department of Agriculture crop estimate will be an important driver of markets, although Mr Watts reckoned the USDA was unlikely to slash its maize crop estimate this month as it waited for a clearer picture of crops to emerge.

Closer to home, DEFRA figures released at the end of December illustrated the tight supply and demand balance for UK wheat as around 0.25m tonnes was cut from its 2011 harvest estimate. “It’s not a huge amount, but it will trim the amount available in the UK and comes at a time when we’re seeing good export pace due to the decent quality achieved last harvest,” said Mr Watts. Trade estimates suggested over 1m tonnes had been exported by Christmas, from a surplus of 2.7m tonnes.

Oilseed rape prices had also taken some support from the problems in South America hitting soya bean crops, combined with wet weather affecting palm oil supplies from Asia and gains in crude oil prices. Domestic rapeseed was worth £358/t ex-farm by mid-week, up about £20/t since Christmas.

Feed barley prices were virtually on a par with wheat and occasionally at a £1-2/t premium. “Historically we’ve seen feed barley at a £20/t discount to wheat, so we could see compounders looking to use less barley,” Mr Watts noted.

“There is potential for good crops in Europe, so if we get normal spring weather and grain markets do fall, there is a risk feed barley will take a bigger hit than wheat. So anyone with 2012 feed barley still to sell should keep a close eye on this price gap.”