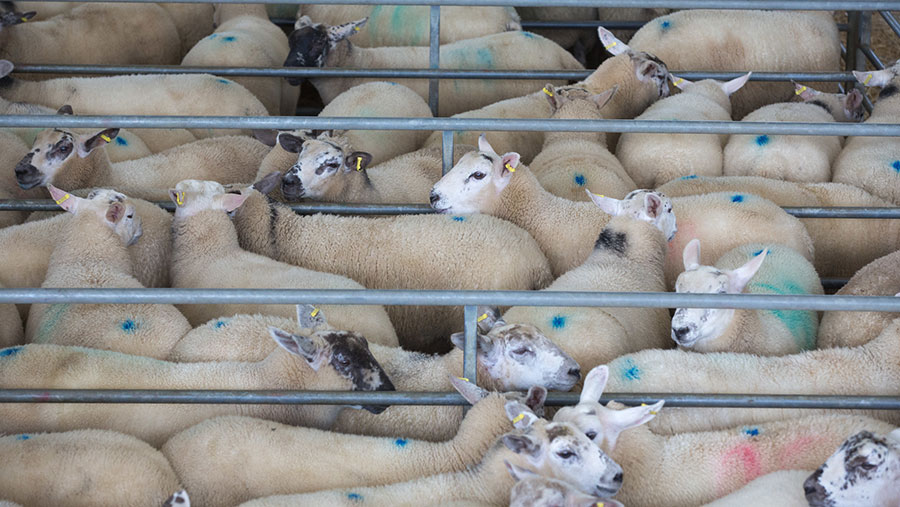 UK liveweight lamb prices have firmed in the past couple of weeks, with heavy animals, in particular, achieving the same or higher prices as lighter lambs, as supplies tighten.

This bucks the seasonal downturn which lamb prices have followed since mid-June. Prices remain above last year’s levels.

See also: Sheep – should I stay or should I go?

Auctioneers across the country predicted prices should hold for a few weeks if supply remains balanced and sterling stays weak against the euro.

However, producers are being warned to market lamb when it’s ready instead of holding out for better prices.

“There is a big premium being paid for heavyweight (45.5kg-plus) animals because there are simply none about,” said David Marshall, operations manager at marketing group, Farmstock Scotland.

He added producers had been quick to take advantage of strong prices in recent months meaning some animals had been sent to market at lighter weights, leaving a real shortage of larger animals.

“People that do have (heavy lambs) will be doing really well at the moment, but my advice is not to hang on for better prices.

“The market is at a good balance and it wouldn’t take a lot to enter an oversupply situation which nobody wants.”

AHDB Beef & Lamb has revised earlier forecasts, now predicting a larger lamb crop for 2017 as a result of a mild spring, lower incidence of disease and a 1% increase in the breeding flock since December.

Slaughterings have also exceeded forecasts for the first half of the year – up 7.7% to 5.9 million head, compared with the same period in 2016 and are forecast to rise by 2% in the remainder of the year.

Despite the rise in slaughterings, consultant and livestock auctioneer at McCartneys in Ludlow, Shropshire, John Uffold said he had never seen such a strong August trade in his 44 years in the industry.

“I’ve got a gut feeling that there is a lot of stock still to come forward,” he said.

“Exports are usually quieter in August with everyone in France on holiday, but we’ve seen a strong trade with good prices.

“The pound is worth €1.10 which makes British lamb really attractive on the continent.”

The weakness of the pound also makes the UK market less attractive to exporters from Australia and New Zealand, both experiencing supply shortages.

“Producers need to look months in advance and see that while imports are down and sterling is weak, prices could always drop.”

John Rossiter, Hobbs Parker auctioneer at Ashford market in Kent said: “Trade is at a very good level so producers would be very brave to hold on hoping for better prices.

“There are not many people with more than 1,000 lambs left, so as numbers drop away, prices should stay buoyant until September and October, by which point store lambs will come back again.”

The short-term forecast would be helped by the Islamic festival of Eid ul Adha at the start of September, said Skipton based CCM Auctions auctioneer and sales manager, Ted Ogden.

“The festival traditionally increases lamb consumption and has a positive effect on trade, keeping it seasonally strong.

Mr Ogden added that finishing had been slow in the North, with plenty of animals with lower than average growth yet to come forward.

Meanwhile, in Northern Ireland, the Ulster Farmers Union has criticised “harsh and unfair” tactics from processors in pulling prices back.

Processors had wiped off 10% of the value from lamb in the past few weeks, destabilising the market and undermining consumer confidence, it said.