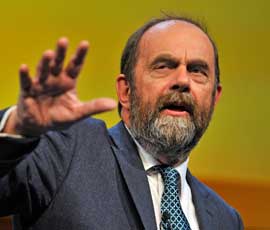 Dairy farmers should walk away from buyers who refuse to abide by a voluntary code of practice for fairer milk prices, suggested farm minister David Heath.

Most dairy processors had now signed up to the voluntary code, said Mr Heath. The minority that hadn’t should realise they were their own worst enemies when it came to securing a continual supply of milk from producers, Mr Heath told Farmers Weekly.

“If at the end of the day, we have the vast majority of processors signed up, then I think it is up to producers to vote with their feet – or vote with their signatures on the dotted line of their contracts,” he said.

Mr Heath’s comments came after farm leaders called on DEFRA to “call in” dairy companies who fail to implement the voluntary code, which is meant to ensure a fair and transparent relationship between milk buyers and farmers.

Mr Heath said he was “constantly talking” to processors and encouraging them to sign up. All the major processors were now on board – and some were going beyond the code’s requirements by introducing formula pricing.

Processors were given until 31 March to comply with the code by offering farmers more balanced contracts. DEFRA adopted the code as its favoured policy alternative instead of legislation proposed by the European Commission.

Walking away from contracts will be difficult for farmers with money invested in non-compliant processors. But Mr Heath said: “I want to now get the stragglers to join up as well and I will be doing everything I can to do that.”

NFU dairy board chairman Mansel Raymond said: “While a number of large milk buyers are implementing the code, there are still some who have failed to step up to the mark and make the changes we have demanded.”

The coalition had called on retailers to ensure that processors offered compliant contracts, said Mr Raymond. But this was not enough. “We need DEFRA to ramp up the pressure to ensure the code is the success it can and should be,” he said.

Richard Elliot of the Tenant Farmers’ Association said: “If milk buyers can’t be trusted to do the right thing and work with farmers to deliver better contracts, then the government needs to step in. This isn’t rocket science, we just want a fair deal.”

Ian Macalpine, chairman of the Royal Association of British Dairy Farmers, said farmers should remember they had the power to change contracts. “With milk supplies short and processors crying out for milk, farmers need to stand firm and demand change,” he said.

Jim Begg, director of Dairy UK, which represents milk processors, said: “The approach of the dairy companies to the implementation of the voluntary code has been both responsible and constructive.

“Many companies have gone beyond the remit of the Code with new pricing arrangements which have been fully discussed with and have the support of their supplying farmers.

In the few areas where there were differences of interpretation within the code, Dairy UK had all worked positively to resolve them.

“This will be an ongoing process leading to a review once the Code has been working for a reasonable period of time.”
The code had effectively established itself as best practice in the industry, added Mr Begg.

“That has created a strong commercial dynamic for its further uptake. When you look at this in totality, the whole situation is a massive step forward for our industry.”

All the news about the SOS Dairy campaign