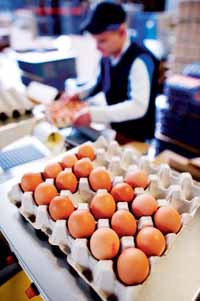 Norfolk hatching egg producer HiBreeds International has for the second time received a Queen’s Award for Enterprise recognising its strong growth in sales and profits.

The last time HiBreeds won the award was in 2003 for success in establishing its domestic and international trade. It has now been recognised a second time for ongoing good performance, with overseas sales increasing from £3.6m to £5.6m in just three years.

“We’re delighted to receive a second Queen’s Award after working hard to adapt to the changes in the economy and demand for food over recent years,” said Laura Chandler, director of HiBreeds.

“The food industry has become a global operation. If the UK farming industry is to flourish, then we have to sell our excellence to the rest of the world. At HiBreeds our philosophy is ‘export and thrive’, and we shall continue to do this.”

Since it was set up in 1998, HiBreeds has exported £50m-worth of eggs to the growth markets of the Middle East and has secured long-term purchase agreements for UK farmers.

The Queen’s Awards for Enterprise reward businesses for performance and outstanding achievement.