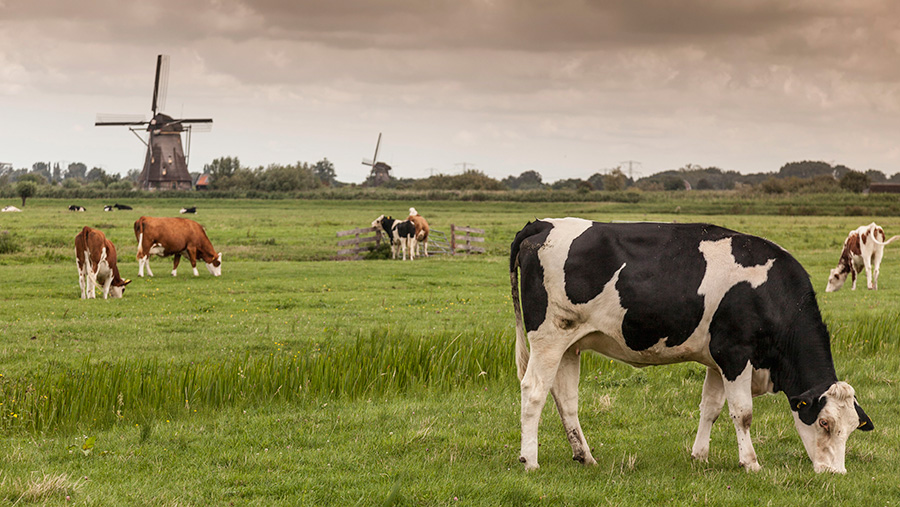 The government of the Netherlands is planning to cull 175,000 cows which would help UK and EU milk prices says AHDB Dairy.

The proposal, which includes €50m (£42.9m) of support for producers, has been submitted to the EU Commission for review.

It is a bid to save Dutch nitrate derogations at the expense of 11% of its national herd.

The Netherlands has breached its phosphate limit for three years in a row, according to the levy board.

While EU25 milk deliveries fell 6.3% between April and August this year, the Netherlands invested in its dairy industry to drive up production, which only fell by 1.33% in the same period.

High levels of production in the Netherlands as well as Ireland were widely viewed as key drivers to the recent dairy crisis – the worst to hit the industry in 30 years.

“There’s already a shortage of milk in the EU, so any reduction in Dutch milk deliveries would put upward pressure on milk prices in the UK,” said Luke Crossman, senior analyst at AHDB Dairy.

“The impact on their dairy industry will depend on how staggered an approach they take to the cull, but production will undoubtedly be affected.

“Our two markets are not strongly related. Dutch beef is aimed at the manufacturing market so it’s unlikely demand for UK beef will be at all compromised.

“Countries like Poland and France who have culled a lot of cows this year will be more affected, and this puts their hopes of a better period next year at risk.”

The EU Nitrate directive (1991) was introduced to protect water quality through reducing the amount of nitrates spread from agricultural sources over nitrate vulnerable zones (NVZs).

The Netherlands face large fines should if they do not reduce nitrates use, but face cutting milk production by 750,000t as a result of the cull.

It is understood the EU commission will want the changes implemented quickly, whereas it would be in Dutch interests to minimise disruption by spreading the cull over a period of time.