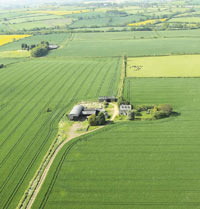 Farmers are bracing themselves for another mapping fiasco after field maps sent out by the Rural Payments Agency were branded “worryingly inaccurate”.

The NFU said it was concerned farmers would have difficulty claiming for their 2010 single payment after it received hundreds of complaints over land being calculated incorrectly.

The complaints have arisen after the RPA began sending out field maps last month in a bid to update its maps of England.

The agency claimed it had ironed out problems encountered when it first carried out its mapping in 2005.

At the time, old data from Ordnance Survey maps and wrongly-calculated parcels of land left thousands of farmers struggling to claim their single payments.

But Richard Wordsworth, NFU single payment adviser, said the quality of data received by farmers to date was “concerning”.

“Our concerns are with the data and not necessarily the changing policy undertaken by the RPA,” he said.

“One farmer had 11 fields missing from his maps – they hadn’t been merged, they simply aren’t there.

“Considering he had an agreed map in January, it’s very concerning. If data are complete in the first place they shouldn’t need further work.

“Our worry is this will impact on the delivery of the 2010 single payment.”

Farm manager and adviser Charles Carter, of Bishop Stortford, said half of his 30 clients had so far received their maps and each of them had “huge problems”.

“Fields are missing, other people’s land is on the maps. One has half of his neighbour’s land shoved into his, another has almost his whole farm put into one field,” he said.

“Everything had been roughly sorted, but now we’re back to square one.

“A lot of people haven’t got time to sort it. People are just thinking about spraying and combining. The whole thing appears to be an absolute mess.”

“I have only done one so far, but every field number had changed and there were a number of mistakes,” he said. “Going by that, I’m not overly impressed.

“A consultant’s time is £100/hour and it could take at least 10 hours to sort out. There are going to be quite a few farmers having to pay that sort of money.

“All the problems had nearly been ironed out, but we’re four years along the line and there are a whole host of different problems.”