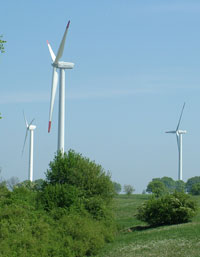 A leading young dairy farmer has expressed his disappointment with the new Farming Connect scheme in Wales after he failed to get funding for wind turbine advice.

Rhys Lougher, chairman of the Future Farmers of Wales, told NFU Cymru that the initiative, part of a £30m range of services designed to support farm businesses in sustainable development, did not appear to encourage young people.

Speaking at the NFU Cymru Council last week (15 January), Mr Lougher said he had been refused the higher tier of grant aid available to farmers under the age of 40 because other members of the family partnership were older.

It meant that the level available for grant aid was 40% and not 80%.

“We are looking at a wind turbine to produce our own electricity,” he said. “We wanted to apply for consultancy advice to work on an alternative energy strategy.

“I was expecting to qualify for the higher tier level of grant aid as a young entrant, but was told that I didn’t meet the criteria because other people in the family partnership are over the age of 40, despite the fact that it was my idea and for my future.

Mr Lougher, who is 27 and farms in partnership with his parents and grandparents, added that family partnerships form the traditional farm structure in Wales.

He questioned whether there were many, if any, farmers under the age of 40 farming on their own and able to qualify for the higher level of grant aid.

NFU Cymru President Dai Davies said that, historically, the grant, funded by Assembly government and European Commission funding through the Rural Development Plan for Wales 2007-13, had been available to any partner over the age of 40. He would write to the Welsh Assembly government minister Elin Jones expressing concern, he added.