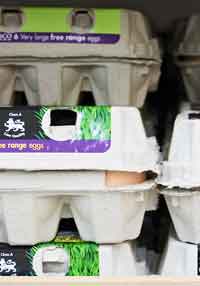 New TNS figures show that year on year egg sales in Ireland increased in volume terms by 7% for July, equating to a 3% increase in value.

And the market can grow even more, according to Owen Brooks, secretary general at the Irish Egg Association..

“In Ireland there is a lower level of consumption than other EU countries. On average we eat three to four eggs per week while health experts recommend up to seven. There is scope to increase this,” he told Poultry World.

“We want to increase sales for those households. The young families in this category are under pressure financially and we are highlighting ways to make eggs more interesting with recipes on our website with slogans around making a meal out of an egg,” says Mr Brooks.

The campaign coincided with World Egg Day on 9 October, the second phase of a €400,000 (£363,000) campaign which kicked off this Spring. Evaluations of advertisements then revealed that almost nine out of 10 Irish people exposed to the egg advertisements believe the key message that eggs are good value for money.

This is also featured in the current campaign with the slogan “Cracking great value“. The health message is also being promoted with the slogan “An Egg a Day is OK” supported by the Irish Heart Foundation and aimed at dispelling the myths around eggs and heart disease.