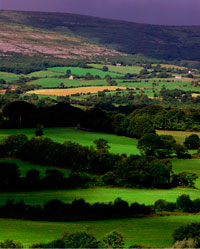 The only areas to record a price increase were Dublin, Wicklow and Kildare, where prices were up by 19.3% to average €13,055/acre (£10,966/acre); however the comparison is made difficult because there were no sales in the Dublin area in 2009.

Despite rising in these areas in 2010, recent prices are in stark contrast with the top average for Dublin, Wicklow and Kildare – reached in 2006 – of €34,959/acre (£29,366/acre). This, at the height of Ireland’s economic boom, was almost three times current values and fuelled widespread investment in UK farmland by buyers who had sold land in Ireland.

The figures are based on 113 completions nationally, although a total of 403 farms were advertised. Buyers were mainly farmers and in general only parcels larger than 20 acres are included in the figures.

While prices had fallen by 9.3% overall, agricultural land had performed better than residential investment, which had fallen more in value than farmland, said Robert Ganley of Knight Frank.

Other Eurozone countries have also seen significant land price reductions over the past few years.