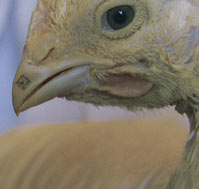 Avian flu and the recent dioxin scare in the Irish pig sector have highlighted a need for a robust electronic system of traceability in the food chain.

This is the aim of Irish researchers at University College Dublin who are looking to develop what they call an “E-tracking” and tracing system for the entire poultry chain in a government-funded project.

They are working on three technologies: barcodes on growing chickens, using hens’ combs as unique biometric identifiers and a tamper-proof sampling and tagging system for poultry feed.

Barcodes are widely used in shops and libraries for pricing and tracking items, as well as in factories and warehouses for inventory control. So could the same technology work with poultry?

A research team at the Bioresources Research Centre (BRC) has spent the last three years looking at applying barcodes to various chicken parts.

They concluded that it is possible to print both types of barcodes on both the legs and beaks of chickens. They achieved a reading accuracy of up to 97% after extensively testing barcodes on dead birds to find the best angle, light and distance for a scanner.

Research is continuing into how to imprint the barcodes on to live poultry, while safeguarding the welfare of the bird and ensuring the durability of the barcode as the bird grows.

A good time to barcode birds is when they are already being handled as day-olds to separate males and females. Researchers have proven that these barcodes can be printed in any size and even miniature barcodes can easily be read by scanners.

Other work to be concluded is the use of automated barcode detection and cost benefit analysis. “The cost has not been finalised yet, but obviously the bigger the producer co-operative or poultry company, the more affordable the technology,” explains Alexis Pacquit. Given that birds are reared and sold in a very short period of time, the extra cost can be recouped quickly.

Researchers have yet to look at a tamper-proof method of transferring the barcode to the poultry meat, such as a whole chicken, thigh, or breast. One method is to use an edible mark, such as a sauce; another option is to put the barcode on the product packaging.

Also being considered in the project is “biometric ID”, which is already a familiar buzzword with the proposed national ID card scheme and the next generation of passports.

It uses unique physical characteristics such as fingerprints, retinal or iris scanning and voice identification. Animals have unique identifiers too, such as facial recognition or retinal scanning for sheep or muzzle patterns for cattle.

Shane Ward and his team looked at the possibility that the avian comb might be a biometric identifier. They took a 10 second video of a layer’s comb, saved the images and developed specific software to isolate the comb profiles.

Having repeated this process many times, they then tried to match the combs using mathematical modeling techniques. They had 84% accuracy in matching combs. Factors that interfered with the results included damaged combs, combs flopping to one side, the age of the bird and intensive production.

Researchers are convinced that, in spite of these problems, the results show that biometric identification of certain types of poultry, such as hens, is feasible, non-invasive and inexpensive. However, it is not suitable for broilers, as their combs only start to develop at the time of slaughter.

The aim is to have all this information combined in one online database which is then available to the regulatory authorities.

“In the case of a crisis they can quickly access the relevant information. For example, if they have a faulty batch of chicken, they know how to trace it. They simply input that barcode and get all related information,” says Dr Pacquit.

Project at a glance