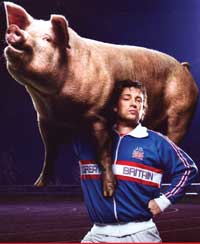 Britain’s pig industry has received a PR boost worth millions of pounds after a programme fronted by TV chef Jamie Oliver told shoppers they had no excuse not to buy British.

During a 90-minute special called Jamie Saves our Bacon, Mr Oliver – who has become a highly-influential food campaigner – told viewers: “If you don’t buy British, shame on you”.

The programme, aired on Channel 4 on Thursday (29 January), highlighted how much of the pork eaten in this country is imported from farms which use systems that are banned in the UK.

It showed how higher welfare standards in the UK had left domestic producers open to unfair competition from EU pig farmers.

The show also looked at how our food labelling system has left customers who want to buy British confused and it named and shamed government agencies who failed to buy British.

Barney Kay, National Pig Association general manager, said he was delighted with the programme and described it as “one of the most significant things” to happen to the industry.

“Jamie advised people to consider cheaper cuts like neck, belly and shoulder. We’re in the middle of a recession and these kind of great cuts are going to be really good for consumers.

“We’re hoping for a significant uplift in sales of British pork as a result of this positive coverage.”

Chris Lamb, BPEX marketing manager, said the industry would not have been able to generate the same amount of publicity Jamie Oliver’s show had.

“A typical advert on Channel 4 is 30 seconds long,” he said. “This is a 90-minute advert endorsed by a man that Sainsbury’s pays £1m a year to promote its brand.

“This is publicity that the pig industry could just not buy.”

BPEX has already been working with the supply trade to make sure they were aware the programme had been coming and are ready to respond to increased demand.

Point of sale information has been supplied to retailers and 6500 independent butchers which refers to the cheaper cuts recommended in the show.

A spokesman for Sainsbury’s said the retailer expected an uplift in pigmeat sales following the programme.

“I think the public trust Jamie Oliver and programmes like this do have a significant impact on buying behaviour,” he said.

“After programmes about the chicken industry in January 2008 sales of organic, free-range and Freedom Food chicken rose by more than 50%. We’re well prepared for this programme.”

A spokeswoman from Tesco said the retailer was encouraging customers to try cheaper cuts of meat, while a Waitrose spokeswoman said its stores had made provisions for increased demand for UK pigmeat following the show.

A survey carried out for Waitrose found 60% of its customers would no longer buy imported pork and bacon.

Did you watch the programme? Tell us what you thought of it. We’ll be collating the best comments for Farmers Weekly magazine.