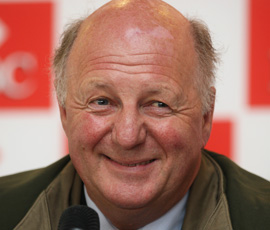 Former farm minister Jim Paice is to receive a knighthood.

Mr Paice is among four politicians who will be knighted after losing their jobs in a government reshuffle on Tuesday (4 September).

In a further move, Downing Street will recommend that former Commons leader Sir George Young is appointed to the Order of the Companions of Honour.

Mr Paice was one of the longest serving Tory frontbenchers.

Prime Minister David Cameron sacked him in a phone call received by Mr Paice while at the Livestock 2012 event. He is replaced by David Heath MP.

In a statement issued later, Mr Paice said: “Obviously I am disappointed at losing my position as Minister of Agriculture and Food, it was a job close to heart.

“Throughout nearly two and a half years I tried hard to help the industry adapt to change and the food industry to play its part in economic recovery.”

“After 23 years continuous service on the Conservative front bench, both in government and in opposition, it will be a great change to move to backbenches.

“Nevertheless I am privileged to have been able to serve and I shall now devote my time to my constituency and my family.”

Farm leaders and fellow politicians paid tribute to the 63-year-old MP, who was widely respected across the industry.

NFU president Peter Kendall said: “He had been involved in farming all his life. He brought some credibility to the job. And he knew whether policies were practical or not.”

George Dunn, president of the Tenant Farmers’ Association, said: “It is a great shame that Jim Paice lost his DEFRA ministerial post. He was doing a great job.

“He was a tremendous force within DEFRA and he will certainly be an extremely sad loss.”

Scottish rural affairs secretary Richard Lochhead, said: “We had our differences but I enjoyed working with DEFRA farming minister Jim Paice MP and wish him well.”

Join the discussion on our forums