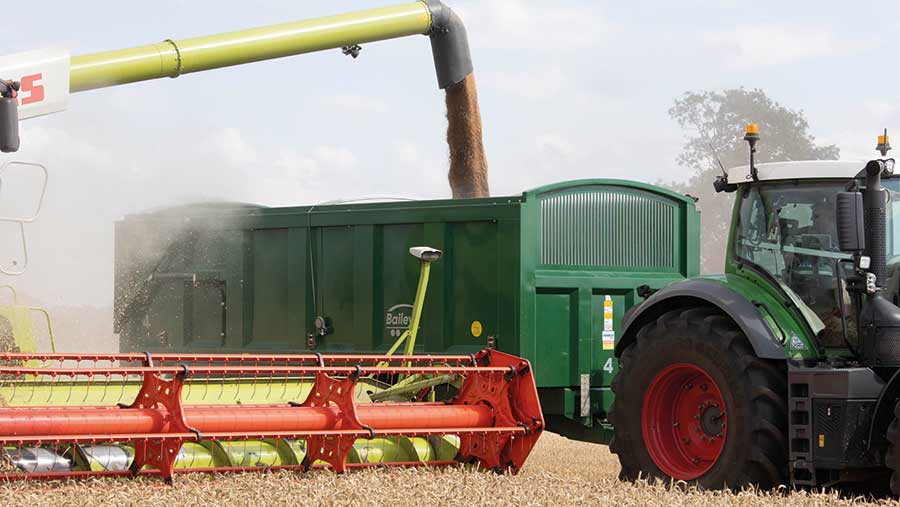 Slow farmer selling and a rise in maize prices are combining to push wheat prices higher.

The trade is trying to draw out spot supplies and there are distinct regional shortfalls, especially further north where harvest is concentrated on spring barley.

The wide range of ex-farm feed wheat prices reflects this, running from £158/t ex-farm for September in Kent and East Sussex, to £170/t in Shropshire, Cheshire and Yorkshire.

UK November feed wheat futures reached close to £170/t at the start of the week and were at £168/t as Farmers Weekly went to press on Wednesday (2 September), having risen steadily since 11 August.

Corn returns data published by AHDB shows that ex-farm purchases of feed wheat in all positions are at the bottom end of the 10-year range, with purchases so far this season at 445,500t by 20 August.

“It’s very much a harvest of two halves – before the rains last week it was reasonably good,” he said.

Milling premiums have also firmed as quality prospects have reduced on the far smaller UK wheat crop since August’s rains.

Depending on the destination, breadmaking premiums are anywhere between £20/t and the mid-£30s/t over feed wheat values, said Mr Rogerson, with the top premiums from tougher homes where fewer fallbacks are allowed.

Delivered prices for November to mills in the North West had reached more than £40/t over feed wheat futures prices, said AHDB analyst James Webster, and even spot milling premiums over November futures were pushing £40/t midweek to the same region.

German milling wheat is being imported to the UK to plug the gap, with competitive prices for this source early in the year having led to several new crop cargoes being booked back in February and March, said Mr Webster.

Far more is expected to come in over the next few months ahead of the UK’s EU exit transition ending on 31 December, potentially limiting further premium rises later in autumn.

“There will be a lot of front-loading imports pre-December, as there could be a £79/t import tariff after that,” said Mr Webster, who expects breadmaking premiums to firm further in the spot market to draw out supplies.

Maize prices have been buoyed by heavy Chinese imports, reaching 4.6m tonnes between January and the end of June compared with 3.5m tonnes in the same period last year.

Additionally China is forecast to import a record 12m tonnes in 2020-21 compared with 7m tonnes the previous season.

A further factor pushing maize prices higher is storm damage in Iowa which led to price increases last week, followed by further rises more recently over dry weather concerns in the US Midwest.

The higher maize prices have led to the removal of EU maize import tariffs, which had already reduced to just pence on 26 August, having been at €5.48/t (£4.87/t) since 12 August.

Nevertheless, there will be plenty of maize to compete with wheat.

The wheat-barley price gap has grown again, reaching £41/t this week. This gap is likely to prompt some demand switching between the two grains.

The UK’s competitively priced feed barley also means it is in the market for export business.